Skip to content
Back in January of this year, I wrote a book review for a brilliant philosophical thriller called The Wizard Within by Albert Thor. One of the best things about writing reviews is when you can honestly be positively crazy about something you like and it ends up really making the artist’s day.

Last week, I received an email from the eclectically delightful Albert Thor and he gave me permission to share it with you here.

Just dropping you a note to thank you for taking the time to read and review my novel.

You did such a great job of it! Finding something like your review online is always such a treat.

If you get a chance please go to my new website and read the beginning of the intro to my new book which I have slightly re-titled. I know this may sound absurd but I’ve solved the meaning and the purpose of the universe and to boot I’ve made it perfectly relevant to our day to day lives. And it certainly has got me out of a few scrapes!!!

I’ve also written Flight Manual for the Soul and The Man who became a Woman who became God and saved the World (an unpublished manuscript/research journal that lead to what I now call Quantum Philosophy and the Reaction Management System but is too controversial to publish at this point in my life. I’m thinking posthumously).

Interestingly, since my brain hemorrhage (Nov/07) I’ve become a musician, too. I have some of my clips on my website if you care to listen. I’m just in the process of getting organized to do some videos of both my songs and my poetry. I’ve been thinking lately that a poem read in the context of a music video (obviously with the emphasis being on the spoken word and not the music) might be the ticket to reintroduce poetry as a viable entertainment. It’s funny but poets are supposed to be so creative yet all they ever seem to do is stand up quite statically before an audience and read their poetry usually in a hard-to-take monotone. I know because I’ve done exactly this, too. Except once I did a really wild show at a local venue that people still sometimes make reference to.

Of course the nudity helped!!!

Anyway, all the best to you, love and joy!!!

Needless to say this email has opened up a wonderful conversation between Albert and me. As synchronicity would have it, I had just found out that the next book that The Purple Door book club will study this coming September is going to be The Wizard Within.

Albert has graciously agreed to be interviewed online by our book club members and he will answer any questions that we have and will also provide us with relevant study materials to “help flush out some of the latent knowledge.” I am very excited about this and it’s always great to have something fun to look forward to for the fall season.

I do hope that my readers in Kingston will consider joining us at The Purple Door at 376 Barrie Street for our September 2010 book club. All you have to do is watch The Purple Door’s Facebook page for details. 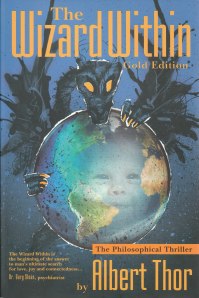 Jay Wiles should be ecstatic, but he’s not. A 33-year-old advertising executive, who quit his M.B.A. program two months shy of graduating because he felt his mind could not process any more learning, lives with his bank manager wife of 9 years, Liz, in a state that can only be described to most people as “the Good Life.” Jay and Liz have already paid off the mortgage on their lovely home with an in-ground pool and they talk about having a baby, next year…possibly.

Jay has been having profoundly strange dreams of late, in which a wizard, dressed much like Merlin might have, inhabits his dreams and encourages him to ask himself why he is not ecstatic and what he has to do in order to slay the Serpentine Dragon that haunts his nightmares. The wizard continues to make guest appearances in Jay’s dreams and upon waking, leaves him in a confused and vulnerable state; questioning everything about the life he’s made for himself.

Why has sex with his wife lost most of its spontaneity and passion?

“All of my life something has bugged me about this world – nothing I’ve ever put my finger on but something that comes and goes like a cool pocket of air that causes me to stop and shiver. I mean just look around you, Liz, surely you must feel it, too…There’s something wrong with the government, with religion, with education, with our economy, with the very basis of our lives and yet I can’t put my finger on what it is exactly. It’s like there’s something evil about this world that we can’t ever escape…So we’re left fighting even our own sexual urges. And if you think about it the ultimate question is this: Why are we terrified of being who and what we really are, why are we so divided from our natural selves?”

And so begins the journey of enlightenment of Jay Wiles. And it just might be driving him stark raving mad.

In the meantime, we follow Gail, a 45-year-old therapist for Individual and Family Counseling Inc. and her most recent client, Vanesa, who is proving to be nothing like the person Gail initially thought she was. Vanesa is a tall, handsome woman with short, black hair who dresses conservatively and is an executive for her company. She makes important decisions and tells people what to do every day. However, she’s been having an incredibly intense, life-changing affair with a mystery married man who is taking her to the outer limits of everything she ever knew about herself and is changing her in overwhelming ways. Her mystery lover writes the most remarkable poems for her that she shares with Gail in therapy, as they both try to make some sense of where he’s coming from and what he’s all about.

“As long as people believe the lie that wisdom is outside of themselves and is acquired, they are forever lost…”

There are no chapters in The Wizard Within but at the beginning of each new section there is a thought-provoking and often profound introductory paragraph in bold and italics that challenges the reader to think.

Jay Wiles undergoes the quintessential spiritual transformation in The Wizard Within against the background of training for running his first marathon, the 79th City Marathon, and while many of those around him think he’s lost his mind and should be contained within the walls of a psych ward, Jay is convinced that he’s discovered the Ultimate Truth of the Universe – “I am you and you are me because we are the Eternal me∞, the experiential part of the Universe which is Immortal.” We are all connected. We are God because God is within us. We cannot search for a higher meaning to life through a god outside of ourselves, all we have to do is be willing to take the risk of going deep within (into the belly of the Serpent) and realize that there is no fear, no anxiety, no risk in pure acceptance.

Jay is left in charge of Mindbenders ad agency while his boss Ted goes on a two month adventurous kayaking vacation in Peru. This is Jay’s chance to start changing the world with his new found wisdom and truth. He now knows that “Consumerism is the symbolic equivalent of Mary Shelley’s Frankenstein as our own fallible creation becomes the agent of our own untimely death.”

As synchronicity would have it, this philosophical thriller The Wizard Within (which was originally written in 1992) has at its core a very similar message as James Cameron’s current movie masterpiece, Avatar. Every single living thing on this planet is connected and if we realize this there is no need or room for life with fear, anxiety or hatred. Having faith in a Higher Power will ultimately save us from total annihilation and that Higher Power is within each and every one of us.

Albert Thor lives what he writes about and he may be a genius, or he might just be crazy. You will have to decide for yourself through reading his work. “Thor considers himself a ‘rational mystic’ in as much as he used his scientifically created tools to launch his Awareness into the mystical realm which blew the doors of his perception wide open, revealing the fundamental wisdom driving the entire Universal show.”

A lot of what he has written in this highly entertaining and often humour-filled book resonates with me, but it’s an intellectually and spiritually challenging novel that will make you think until your head aches. I haven’t quite decided whether Thor has managed to find a way to live in an ego-less state or whether he has the biggest ego in the Universe. This book was recommended to me by my cousin, Susan, who sells it at her book and gift store for the body, mind and spirit, The Purple Door, in Kingston, Ontario.

Thor, who survived a brain hemorrhage in November 2007, has a website at www.soulpurposepublishing.com and there states that “SoulPurpose Publishing is dedicated to contributing to the next evolution in human Awareness and to inspiring a new literature of hope from the perspective of Albert Thor’s brainchild, Reaction Manageme∞nt.” The Foundation for the Reaction Manageme∞nt System™ is developed across these three startling books: Flight Manual For The Soul (1997), The Wizard Within (1992), The Emotional Fitness Revolution (to be released in April 2010), as well as upcoming titles including The Good Shepherd.