Recorded at multi award-winning Armoury Studios (Vancouver) under the direction of co-producers Tommy Mac (Hedley) and Luc Tellier (David Usher, Marie-Mai, The New Cities), “Liberty” written by Raph Pilon, is an honest rite of passage about viewing the world from a different place and space,something all of us, especially the young, can’t wait to do. Supported at radio with tracking and promotions by Linda Dawe of Music Solutions, the edgy pop vibe and compelling lyrics are captured in a fresh, captivating video. Filmed in Quebec and under the direction of Cat Around Films (Epitaph Records, Mediaskare, Artery Foundation), the visual inclusion of hilltops and river carved valleys is a visual treat.

Performing in front of audiences spanning hundreds to thousands, Bridgeway have rocked stages at Richelieu Summer Festival, Music City North (Toronto), Cabaret Lion d’Or and supported, “Hold the Fort – Giving Back to Fort Mac, Toronto Style” to name a few. They have opened for Hedley and enjoyed provincial success with their third single, “So Far Away” achieving a listener audience of 17,630,000.

With a growing fan base and a combination of diverse instrumental and songwriting talents, Bridgeway are poised to generate a new musical buzz beyond their beloved Montreal.

Every so often, I have the extra special pleasure of working with a recording artist whose music I personally really love and Greg Wyard is one such artist. The man is a genius. He’s not only a brilliant musician and gifted singer-songwriter, but he’s also very computer savvy.  The audio and video for his self-penned and arranged “At The End Of The Day” was edited, mixed and colour corrected by Greg, which is pretty impressive, but as you’ll see, it’s his music that really speaks for itself. Without further adieu, I invite you to watch the video premiere from Greg’s live performance of  “At The End Of The Day” at the June 2014 CD Release party for his third album, Encore, at Hugh’s Room in Toronto.

For those of you who haven’t heard of him yet, Greg Wyard is a singer-songwriter, guitarist and bass player who has been diligently working at his craft since he was ten years old. Greg moved to Canada from his native England at age 13 and settled in Toronto, earning a reputation as one of its most hardworking solo performers. Greg has a music degree from McGill University, and released three original CDs from which his songs “Something I made up” and “What are you trying to prove” both placed in the Standard Radio National songwriting competition. An international performer, he has toured the United States, England, Malta, Australia, Norway and most recently Goa.

Unapologetically melodic in his writing, Greg’s songs can’t escape the influences of the music that shaped him – The Beatles, Crowded House, Squeeze – and he loves to write pop songs that surprise you with an intricate little guitar line here or an unexpected key change there.

As a cover performer, Greg has an encyclopedic knowledge of popular music. Known for 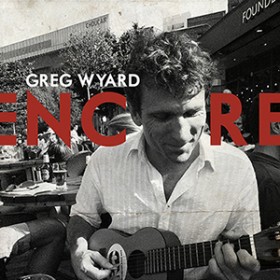 his faithful reproductions of intricate classic rock songs such as Bohemian Rhapsody and Baba O’Reilly (which you can watch and listen to on YouTube or Soundcloud) using just his voice and guitar, he can play any one of a thousand songs off the top of his head.

Greg released his third CD entitled Encore in 2014 and is currently promoting the CD around Canada and the rest of the world.

If you have an opportunity to see Greg Wyard perform live at any one of the intimate venues that he currently frequents, DO NOT MISS HIM! You will be utterly amazed by his talent and if you have the chance to chat with him, you’ll also discover what a genuine and personable gentlemen he is. Artists like Greg Wyard are responsible for inspiring me to want to pursue a career in the Canadian music industry and to continue to work hard to do my absolute best at promoting them through social media marketing.

Please be sure to leave Greg a comment on YouTube with your thoughts about his new video. 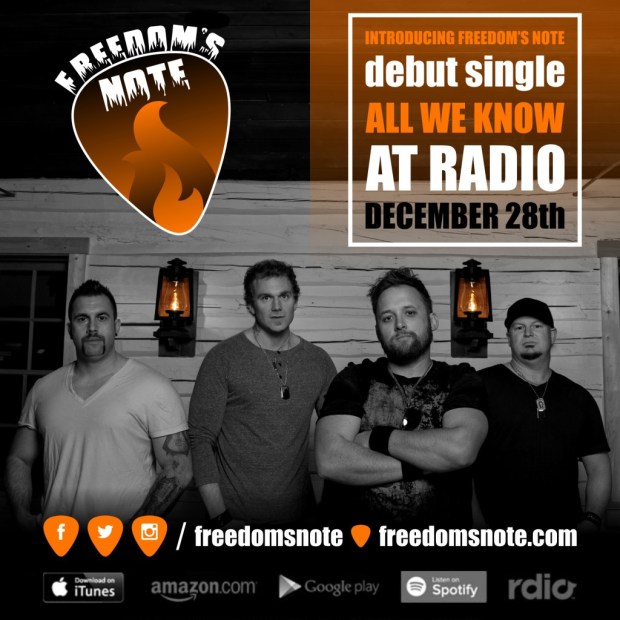 If Rock ‘n’ Roll was fine wine, with Freedom’s Note, what you experience is akin to the finest among them.

Freedom’s Note takes you on a sonic journey of varying energy to many places, through several feelings reminiscent of the rich Rock ‘n’ Roll history of legend before them, with subtle nods in homage to several other genres along the way.

Drawing on music influences from Guns ‘N Roses, Queen, Foo Fighters, Nickelback, Shania Twain and Pink, to name only a few, the foursome steadily grew audiences under the name Destranged and continued to awe those they performed for, with cover songs and top charting hits. In 2012, the integration of original written material was incorporated into their live shows garnering even more massive appeal and success, with the boys from Newfoundland performing in wider Alberta venues and opening for various renowned acts including Simple Plan, Finger Eleven, Trooper, Kim Mitchell, Mother Mother, Mötley Crüe’s Vince Neil, and Scott Weiland of Stone Temple Pilots and Velvet Revolver fame.

Their edgy pop/rock vibe and compelling lyrics contributed to the release of a full album of original material launching Destranged from live band status to recording artists in their own right. Realizing a new band name was in order, they unanimously selected the most requested song from that album, and, Freedom’s Note took flight.

“All We Know” is about carving your own path in life, taking the road less travelled and putting everything on the line no matter what consequences or barriers are put in front of you,” states Donny Synard. “Too many people look for the easiest or safest road in life.  “All We Know” is about seizing each moment and believing that anything is possible. BE INSPIRED!”

Freedom’s Note will expand their performances and showmanship to audiences during their first national tour in the summer of 2016.