[Kingston ON, Canada]  The Ambassador Hotel & Conference Centre, Kingston’s premier conference hotel, will be the backdrop for the inaugural Kingston Ontario Music Conference to be held on Saturday, October 3, 2015 from 10:00 A.M. through 11:45 P.M.

This FREE of CHARGE and non-profit initiative strives to become an annual forum to foster the professional development and exposure for local music performers, technicians, writers, producers, sound engineers and anyone involved in any aspect of the music industry.

KOMC is spreading the word throughout Eastern Ontario focusing on a population base of over one million people in a region that includes Kingston, Brockville to the east, Smiths Falls and Ottawa to the north and the Belleville-Trenton area.

Every musician and fan of music has heard about NAMM; consider this event eastern Ontario’s version of the National Association of Music Merchants, with many local extras. During this one day event, musicians and members of the public will have the opportunity to enjoy a spectrum of activities.

This widely inclusive, professionally distinguished and comprehensive conference promises to universally appeal to anyone and everyone with even the slightest sense or love of music! Let’s make this edition of the Kingston Ontario Music Conference the cornerstone of more to come.

“This is the second coming of Headstones, where band and fans are a part of a mutual admiration society of which Dillon is proud to be a part of.” – Huffington Post

K-Rock 105.7 proudly presents Headstones, with Special Guests: The Glorious Sons at Rogers K-Rock on Saturday, December 28th for their first hometown concert in a decade!

Hot off their #1 hit single ‘longwaytoneverland’, Headstones are back again. Hugh, Trent, Tim and Dale are following up the worldwide release of their new album ‘Love + Fury’, with a Kingston performance for all of their hometown fans and friends.

Formed in Kingston, Ontario in 1987, Headstones began their early music career performing to anyone who would listen. At the time, artists such as Neil Young and Leonard Cohen were gracing the charts on Canadian radio while American musician Stevie Ray Vaughn was reviving the blues south of the border. Headstones decided to take a much different approach. Carrying a similar attitude to Iggy Pop and Henry Rollins, Hugh Dillon led members Trent Carr, Tim White and Dale Harrison into becoming a band synonymous with the real Canadian road-worn punk, touring their anti-social behaviour across the country to rough and restless fans.

Kingstonians will remember the legendary hometown performances by Headstones, which include appearances at Richardson Stadium, Fort Henry, and ‘A Joe Show”. You definitely don’t want to miss this rare opportunity to see Headstones, live in their hometown, Kingston, Ontario at Rogers K-Rock Centre. 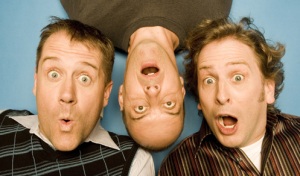 The Arrogant Worms, Canada’s best-loved musical comedy group, is kicking off their 20th Anniversary tour in the place it all began – Kingston, Ontario! Tickets are on sale now for their Sat., Feb. 5th show at Duncan McArthur Auditorium (Queen’s west campus).

Three quarters of a quarter of a century ago, something magnificent happened in Kingston, Ontario. Sensing a desperate public need for musical comedy, The Arrogant Worms was formed. The Arrogant Worms began as a comedy troupe performing songs and sketches on the Queen’s University radio station in 1991. As the live show developed, the songs delighted the audience. The sketches – not so much.

It began as a hobby, making fun of a big dumb world. Luckily, the world is still dumb and The Arrogant Worms (Mike McCormick, Chris Patterson and Trevor Strong) still have plenty to sing about. The shows are fast, furious and family friendly. The wit is quick, the satire is biting and the musicianship is second to none. Their appeal has earned them fans from kids to parents to grandparents to Princess Leia.

albums and played on three continents to crowds as large as 100,000. They were recognized in 2003 as the Touring Act of the Year by the Canadian Arts Presenting Association. The Worms have entertained at corporate functions, sung anthems at sporting events and emceed at major festivals. Their songs are in school lesson plans, in textbooks and even played on the Space Shuttle. On earth or in space, everyone digs these Worms.

The Arrogant Worms have chosen to kick off their 20th Anniversary Tour in the very place where it all started – Kingston, Ontario at Duncan McArthur Auditorium on the west campus of their alma mater, Queen’s University. They will perform 20 of the hits that span their exciting 20 year career, songs that have made The Arrogant Worms one of Canada’s best-loved musical comedy groups.

I have been following the acting career of Kingston, Ontario based rising star, Hannah Smith, for a couple of years and have been thoroughly impressed by her remarkable performances in Miss Julie, Ghost Of The Tree, Sweeney Todd, and A Tribute To Patsy Cline to name a few. She has also appeared in Sense and Sensibility, Sleeping Beauty, Til The Boys Come Home, and her latest play, Educating Rita, directed by Valerie Robertson for Theatre 5 has just completed a very successful run at the Baiden Street Theatre.

Hannah was an absolute revelation in Educating Rita, which was the best play I’ve seen in Kingston in ages! She and G. Robert Bowes were perfectly matched and gave fantastic performances!

The lovely Hannah, who is a 17-year-old student at Kingston Collegiate

& Vocational Institute, has been acting in local theatre for almost ten years already and what I’m most struck by is her ability to perfect different accents and to convince her audience that she is many years older than she really is. She’s a superb young actress with an undoubtedly successful career in acting ahead of her.

I recently had the opportunity to talk with Hannah about her experiences in acting and what she hopes will be in store for her in the future.

1. Hannah, how old were you when you appeared in your first play?

I was eight years old. The play was “A Little Princess”, an adaptation of the Frances Hodgson Burnett story.

2. Have your parents encouraged you to pursue acting?

My parents certainly are not adverse to the idea. They have been very supportive, driving me to rehearsals for the last nine years.

3. Who is your acting coach and what can you tell me about him/her?

Charles Robertson has taught me theatre and acting for nine years. He’s very supportive and provides all sorts of opportunities for young people in theatre that they may not get with other people. Charles and Bottle Tree Productions are certainly a great part of the reason that I enjoy theatre so much.

4. You’re a wonderful singer. Have you taken singing lessons?

Thank you! Until late this fall, no. I’ve never had any formal vocal training, I just love to sing and do it all the time.

5. How many plays, in which tickets were sold, have you appeared in so far?

Oh wow. Let me count…33 in total, with one more in rehearsal right now.

6. Have you been featured in any movies? If so, what can you tell me about the differences between performing for the stage and screen?

I’ve completed filming for one low-budget film. There are many differences between film and theatre acting. When you’re acting on film, you can afford to be much more subtle. With theatre, smaller movements are lost, while in film every shift of the eye is seen. You also have to be much more conscious of being still and only moving when absolutely necessary. They’re very different, but both a lot of fun.

7. Will you share your most memorable acting experience to date and what made it so memorable?

One of the most memorable experiences I have had acting was during opening night of Sense and Sensibility. I played Marianne, and during a particularly emotional scene I ran offstage, in the process twisting my ankle and falling offstage. I had to continue the show and the rest of the run with a limp and a tenser bandage.

8. Is acting a career that you want to pursue as an adult?

I would love to pursue acting as an adult. It’s one of the only fields that I can see myself working in and enjoying myself.

9. What is it about acting that incites your passion?

I’m not sure what it is about acting and theatre that I like so much. I love having the opportunity to, for an hour or two, become a completely different person. There’s nothing quite like having the lights blinding you while you can feel the audience around you. If an actor ever tells you that they don’t like to be looked at, they’re lying. I think it’s just the combination of all the different aspects of theatre that I’m so passionate about.

10. What are some of your favourite plays that you haven’t yet had a chance to perform in?

I love Tennessee Williams, so The Glass Menagerie or Streetcar Named Desire would be up there on the list.

11. Who are some of your favourite actors and actresses?

I really admire classic film stars like Audrey Hepburn and Humphrey Bogart. The poise and class that they brought to film is hard to come by nowadays. Kate Winslet is another actress that I like to watch.

12. What traits do you respect the most in an actor?

Versatility and subtlety. I admire actors who are able to play many different roles and bring subtlety to each. It’s the small things that really bring characters to life.

13. What do you have coming up in the near future?

I’ve been cast as Rizzo in K.C.V.I.’s school musical this year, Grease. The show opens early in May. Before that I’m planning on producing and directing a show for the Sears Drama Festival, something I’m very involved with through school.

14. Do you have an agent? Are you looking for one?

At the moment, no, I don’t have an agent. But as I am now becoming more interested in pursuing acting as a career I am aware that finding representation is the next step.

15. Are you willing to relocate to Toronto or another big city in order to further your career?

In order to successfully work in entertainment, this sort of relocation is necessary and something that I would be willing to do when the time is right.

16. What are your career goals for the not too distant future?

Not too distant goals would probably include finding representation and surviving my final year of high school. Which I think could technically be considered a “career goal.”

17. Finally, what part is it that you feel that you were born to play?

That’s a tough question. Probably something along the lines of Lady Macbeth. I love how manipulative she is. And playing crazy is always fun.