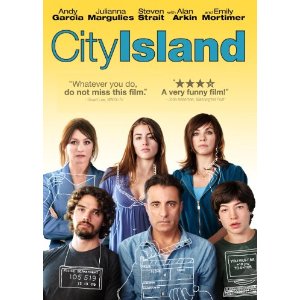 The Rizzos are a family full of secrets who are about to collide head on with the truth in the quirky ensemble comedy City Island.

Everyone in the Rizzo family is lying to each other and no one but Vince’s illegitimate, ex-con son Tony (the very handsome, buff Steven Strait) knows what’s really going on…or does he?

Vincent Rizzo (Andy Garcia who is absolutely delightful in this!) is Correctional Officer 426 who lives in the beautiful Bronx suburb of City Island where you’re either a muscle sucker (originally from somewhere else) or a clam digger (born and bred in City Island). He’s lying to his wife Joyce (Julianna Margulies of The Good Wife) about his smoking and tells her that he’s out playing poker when he’s really taking an acting class in the city. Joyce lies to him about her smoking and thinks he’s having an affair, so she decides to flirt with Tony who Vince has helped to get an early parole and brings home to help build a bathroom in his backyard shed, without telling anyone else in the family that he’s really Tony’s father.

Vince’s daughter Vivian (Garcia’s real-life daughter, Dominik Garcia-Lorido) is home from school on a break and lets her parents think she’s studying hard and going to work in a legitimate job when she’s actually working as a stripper to pay for her tuition because she’s been kicked out of school for smoking pot. Her creepy and sarcastic younger brother Vince Jr. (Ezra Miller) is also hiding his nicotine and pot habits, not to mention the fact that he gets off on feeding fat girls and likes to look at them on the Internet.

With all these secrets obvious to the viewer, you know that the skeletons are going to burst out of the closet at any moment but the comedic timing in this little gem is pitch perfect. Garcia’s Bronx accent is authentic and his scenes with Juliana Margulies are hilarious while those with his acting partner Molly (Emily Mortimer), who is harboring her own secret, are engaging and poignant. Academy Award winner Alan Arkin has a small role as their acting teacher and one of the best scenes in the movie is when Vince auditions for a Martin Scorcese/Robert DeNiro film and blows the casting director away although Vince doesn’t even realize that he’s acting! Ezra Miller (Californication and Every Day) does a brilliant job of portraying the annoyingly sleazy Vince Jr. and the discovery for me of straight man Steven Strait (of Stop-Loss and 10,000 BC) was just a bonus!

The setting of the small, picturesque fishing village that is City Island (which I’d never heard of) is captivating and as much a character in the film as each of the dysfunctional Rizzos. This is a refreshing, well-directed, very well acted film that is absolutely worth renting if you’re looking for something warm, fun and just a little bit kooky. After all, “truth is stranger than family.”