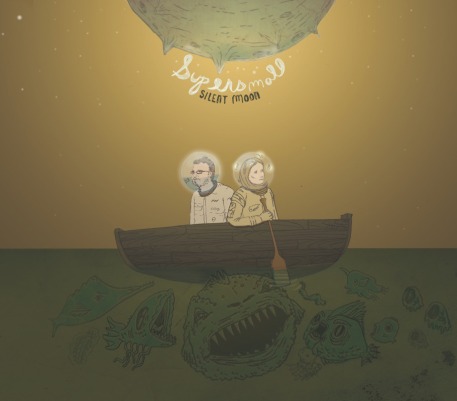 A week ago, on St. Patrick’s Day, I happened to randomly click on the link of a tweet by @colindempsey and listened to his storytelling/stand-up comedy performance on YouTube. The first thing I noticed was his Irish accent which always makes me perk up, and the second was that he was genuinely funny. So I tweeted to him to tell him how much I enjoyed the video and we started chatting and he told me that he’s a singer-songwriter and one-half of the New York City based indie rock duo, Supersmall. As I’m a big fan of Irish musicians, I immediately went to their Bandcamp profile and listened to a couple of tracks from their latest album, Silent Moon. I was not only immediately captivated, but I love their sound so much that I purchased the album. I haven’t been this delighted by a new music discovery since I met Melbourne based, Irish singer-songwriter Andy White five years ago. For those of you who know me, you know what that means. True love for an artist of whom I will forever be a fan, and the same goes for Colin Dempsey and Supersmall. So, please read further and better yet, listen to Supersmall on Bandcamp or their website (links below) and see if you don’t feel the same way.

A little older, a little bit more experimental, the album takes you through a daydream-like stretch of jazzy melodies, retro-rock and songs sung out to sea. A truly original sound inspired by artists such as Neil Finn and Pink Floyd, there is a sophisticated balance of poetic lyrics that span religion to untraditional love songs, honest vocals and intricate guitar—all amidst an ethereal atmosphere of keyboards, strings and trumpet. 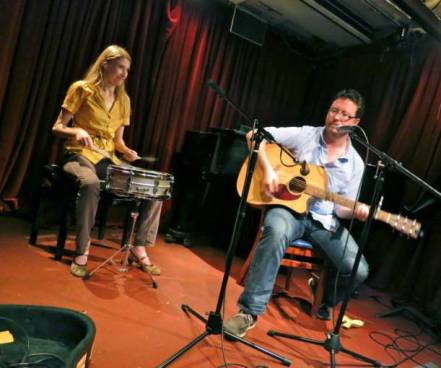 Dempsey is an Irish writer and storyteller based in New York. He has performed his unique blend of indie-rock music in Australia, New Zealand, Ireland, and most recently, the US. Schiller is a musician, storyteller and Neuroscientist, who leads the Schiller Lab of Affective Neuroscience at the Mount Sinai School of Medicine. In 2013, the duo released their debut EP, This Other World. The Indie Blender says, “Dempsey’s and Schiller’s experience as musicians is evident in this pristinely produced collection of dreamy folk songs.”

Indie-Music.com says the two “make a compelling duo; a very organic and natural partnership of storytellers whose lyrical content shine among these seven well-crafted songs.” They also featured This Other World on their 13 Editor Picks of 2013 list. Silent Moon is the band’s sophomore project, released February 2016.

Colin and Daniela met on the New York storytelling scene – both are also writers and big fans of good whiskey. Most importantly, they are close friends and all of this shines through on the record.

The next time you’re in New York, look them up and try to catch a live show, they’ll have whiskey.