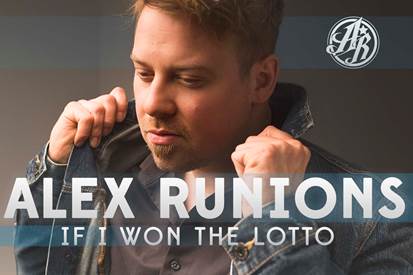 [Toronto, Canada]  After spending the latter part of 2015 writing with some of North America’s most prolific writers and building a strong industry team, Regina based, Alex Runions is set to release his brand of heartland Country that will be embraced by his current fans and impossible to be ignored by new fans. Recorded at 2-time CCMA Award winning MCC Recording Studio (Calgary), his new single, “If I Won the Lotto” will release to radio on January 25th.

“If I Won the Lotto” (Alex Runions, Steve Mitchell, Nashville) is tracked at radio by Lauren Tutty of Lauren Tutty Promotions. It is a fun, loose and energetic song — something we need to help get us through the winter blues. “It’s nice to dream sometimes of what you would do if you won the lotto,” said Runions, “give some away, go on a trip, buy nice things or invest it. Whatever you think you would do, it’s still great to dream sometimes.” The lottery is something we can all relate to, especially on the heels of the record-setting Powerball draw in the United States earlier this month.

A constant in the Saskatchewan Country Music Association, and highly regarded by SaskMusic, Runions had a big 2015 and was a 3-time SCMA Nominee in the categories of Male Vocalist of the Year, Fan’s Choice Entertainer and Song of the Year – “Little Bit of Sunshine” (A. Runions/W. Mack).

In 2013, Runions won the Big Dog 92.7 FM/SaskMusic ‘Next Big Thing’ competition and received funding through the RAWLCO Radio 10K20 Grant. This opened the door for the creation and production of his current and sophomore CD, SOUTH OF THE CITY, recorded at two-time CCMA Studio of the Year, MCC Recording Studios. SOUTH OF THE CITY released Sept 25, 2015.

Performing across Saskatchewan and throughout Canada for several years, Runions has taken stages at Big Valley Jamboree, Craven Country Jamboree, Dauphin Countryfest and is a regular on the Canadian Country club circuit including Eldorado Country Rock Bar (Regina), Ralph’s (Medicine Hat) and Ranchman’s (Calgary). He’s opened for many prominent country artists including Gord Bamford, Aaron Pritchett and Rodney Atkins while also closing out performances from Dallas Smith, The Road Hammers and Neal McCoy.

His honest voice, tireless dedication and heartfelt approach have made Alex Runions a familiar voice in the Saskatchewan music scene with music industry experts betting the Queen City singer/songwriter will breakout nationally in 2016.

“If I Won the Lotto” is available on iTunes.  Alex Runions acknowledges Gee Bee Construction (Kipling, SK) for their support and contributions.