Some weeks are more eventful than others and it has been a big week for Toronto’s Sultans of String. This week my client, 2x Juno nominated and multi award-winning world music supergroup, Sultans of String have lots to be excited about!

First, after ten years with the same website, the band has a brand new look over at www.sultansofstring.com designed by Dana Whittle of Vizou. Head on over and take a look and if you haven’t already signed up to their mailing list you can do it now right from the Home page.

This week, for the second week in a row, Sultans of String’s latest album, Subcontinental Drift, charted at No. 1 on the National International Chart of !Earshot Magazine. Congratulations guys!! 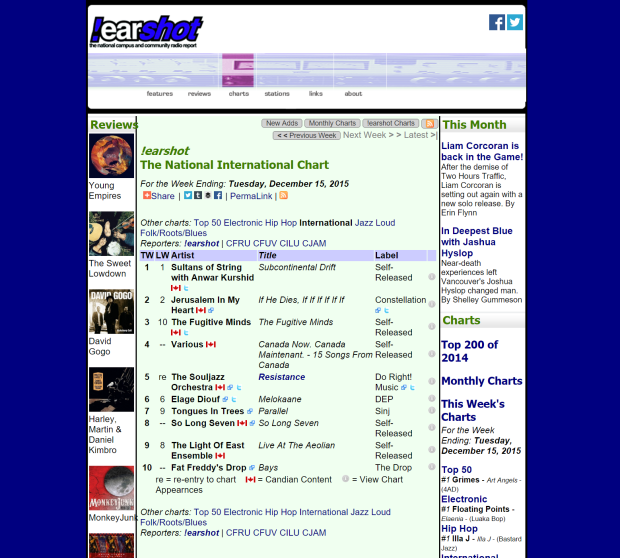 Sultans of String are turning world music on its axis, thrilling their audiences with their genre-hopping passport of Celtic reels, flamenco, Gypsy-jazz, Arabic, Cuban and South Asian rhythms. This group celebrates musical fusion and human creativity with warmth and virtuosity and you can observe this fact for yourself by viewing their two new videos for songs from Subcontinental Drift featuring sitar virtuoso Anwar Khurshid (whose music appeared in the Oscar winning films Life of Pi, Kama Sutra, and Love Guru).

On Tuesday, December 15, 2015, CBC Music premiered Sultans of String’s version of Bob Dylan’s iconic folk song, “Blowin’ In The Wind.” This video contributes to the fundraising initiative for Lifeline Syria. You can watch it now, exclusively, at:

Yesterday, Glide Magazine premiered the band’s video for “Enter The Gate” in their article and interview with band leader and violinist, Chris McKhool in:

SULTANS OF STRING SOAR WITH WORLDLY JAM ON “ENTER THE GATE”

Watch “Enter The Gate” now at:

Both videos were filmed in the great, multicultural, cosmopolitan city of Toronto and are a testament to Sultans of String’s love of their city, their neighbourhoods and their community. This group of extraordinarily talented gentlemen are all advocates for world peace, ecosustainability and arts education among other causes.

Stay tuned for more exciting news from some of Toronto’s favourite sons as Sultans of String continue to tour across Canada and the United States in 2016.