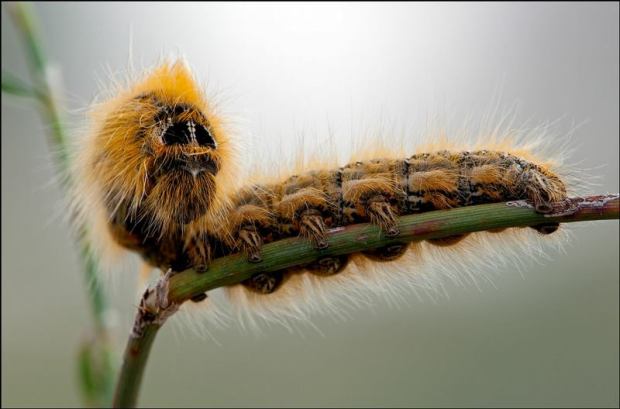 There once was a Caterpillar who was thoroughly sick of always being stuck near the bottom of the food chain. All the other animals –  birds, moles, lizards, frogs and spiders – would hunger for his soft, succulent sausage-like body, licking their lips avidly in anticipation of a delicious meal. Even the tiny ants posed a mortal danger to his life.

The only option open to the Caterpillar was to mimic some inedible object like, for example, a bird dropping, but that would be such an ignominious existence. Not only would he have to remain motionless all day long, but, most humiliating of all, he would be forced to alter his appearance to resemble a piece of dung. Surely, that was a price too high to pay for staying alive, for nothing could be lower than looking exactly like the end product of the digestive process.

One day, full of anxiety and fear as usual, lest he be seen and eaten, the Caterpillar was furtively drinking from a puddle on the forest floor. In the reflection cast by the clear and still water, he noticed, for the first time, that his head was covered by a thick mane of yellow hair. It was then that the Caterpillar was struck by the happiest, most brilliant insight of his life – he realised that, given his looks, he could impersonate a lion! The advantages of such a mimicry would be numerous: amongst other things, not only would he be on the very top of the food chain, afraid of no other animal, but, even more importantly, he would be simply gorgeous.

All the insects scoffed at the Caterpillar, saying how ridiculous his plan was, but the Caterpillar just ignored them and, enclosing himself in a cocoon, proceeded confidently with the metamorphosis.

A certain time had passed and the silly Caterpillar with his crazy dream was almost forgotten about, until early one morning, there was a terrific thunderclap of noise that reverberated right across the woods. The cocoon that held the Caterpillar burst open and out of it emerged a perfect specimen of a flawlessly proportioned, at-the-top-of-his-strength, full-sized lion.

The insects were petrified as to what the Caterpillar-Lion might do to them in revenge for their previous jeers, but he haughtily disregarded them, for, after all, he now was the king of the jungle that wouldn’t even deign to notice such measly bugs.

Proudly, the Caterpilion descended from the tree and began to stride majestically, as befitting his new station in life, roaring at the top of his lungs and showing off his muscular, lithe torso and luxuriant mane.

No other animal dared approach him, of course, and the Caterpilion was very pleased with himself, feeling the kind of deep, pure contentment that only those who had tasted the very dregs of life and found a way to clamber out of the abyss could ever feel. Ahead, a whole new existence shimmered in all of its glory and the Caterpilion was eager to find other lions with which he would live out the rest of his days in joy, happiness and freedom.

And so, when he saw a pride resting lazily in the midday sun, he rushed blithely towards it, eager to make friends with those he now saw as his compatriots, being completely unaware that lions are territorial animals who are viciously protective of their domain. The incensed pride could not believe that a mature lion would be so recklessly stupid as to completely ignore the markings that they assiduously used to bound their dominion, and enter carefree into their land. They promptly tore him into little pieces and that was the end of the Caterpilion and his happy, new life.

Boris Glikman is a writer, poet and philosopher from Melbourne, Australia.

He says: “Writing for me is a spiritual activity of the highest degree. Writing gives me the conduit to a world that is unreachable by any other means, a world that is populated by Eternal Truths, Ineffable Questions and Infinite Beauty. It is my hope that these stories of mine will allow the reader to also catch a glimpse of this universe.”

Boris welcomes feedback and can be contacted by email at bozlich@yahoo.com.au