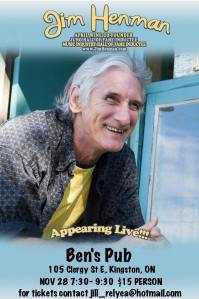 April Wine co-founder and Juno Hall of Fame Inductee Jim Henman will be performing a solo show at Ben’s Pub in Kingston on Thursday, November 28, 2013 at 7:30 pm. Jim’s country blues solo work is featured on his latest album, Same Old Feeling, (Ravenwood Records) and can be streamed here.

Tickets for Jim’s Ben’s Pub appearance are $15 and available by contacting jill_relyea@hotmail.com.

Somewhere between the rhymthic yodeling of “The Singing Brakeman,” Jimmie Rodgers and the flavorful grooves of ragtime guitarist/singer, Blind Blake lies the roots of Jim Henman’s musical beginnings. Writing his first tune, at age 12, Jim spent much of his youth strumming a Stella acoustic guitar on the sandy shores of Clam Harbour, Nova Scotia. By the mid-60s, Jim, with high school friends Myles Goodwyn, Greg Stephen, Dave Dodsworth & Doug Grace started the top 40 band, “Woodies Termites.” Jim and Myles went on to co-found the Canadian rock band, April Wine, in the fall of 1969 with Jim’s cousins, David and Ritchie Henman. Jim, David and Ritchie, along with George Mack, had formed the band Prism from late 1968 until summer 1969.  April Wine moved to Montréal in 1970, signing with Aquarius Records.

Shortly after the release of their debut album in 1971, Jim decided to leave the band, moving back to the East Coast to start a family and pursue a career in Medical Technology. While his career as a professional musician may have been put on hiatus, Jim remained connected to the musical community in Halifax, continuing to write music and performing locally.

Jim officially re-emerged onto the East Coast music scene in the 90s, co-writing and co-producing the album, More Than My Share for Cape Breton singer, Jeannie Beks. He also co-wrote the music for “Death the Musical,” a stage production performed both at Halifax’s Neptune Theatre and in French, at Théâtre Génération in Montréal. This musical score was later released on CD. In addition to writing and producing, Jim also began performing in songwriters’ circles throughout Nova Scotia, alongside artists such as Terry Kelly, Laura Smith and Cheryl Gaudet.

Despite the mainstream success of April Wine, Jim’s contribution to the band can hardly be deemed his greatest musical accomplishment. Over the past thirty years, Jim has dedicated his passion, enthusiasm and expertise to numerous projects, much of which hold special meaning in his life. One such project, “Night to Remember,” was a musical event (held annually for four years) that Jim co-produced along with Halifax entrepreneur Joe Graves, in support of recovery homes for men and women in Halifax.

For Jim, this award has been somewhat bittersweet; prompting sentiments of accomplishment and nostalgia. Yet, in many ways, this award has also provided a sense of closure on this chapter of his musical career, while  providing the ideal momentum for propelling him into new directions and establishing new beginnings as a solo artist.