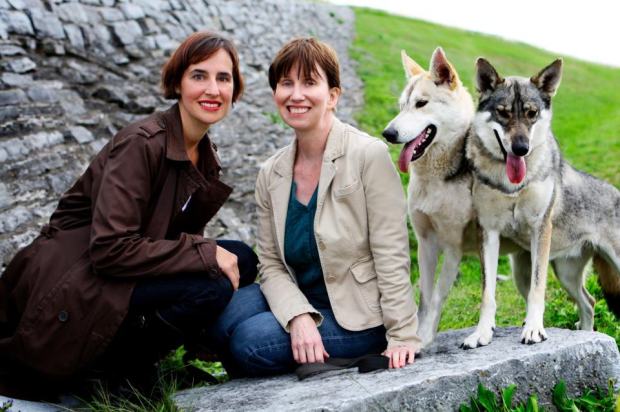 Today, I’m talking to Canadian writers Gina Buonaguro and Janice Kirk, co-authors of The Wolves of St. Peter’s, The Sidewalk Artist and Ciao Bella. I loved The Sidewalk Artist when I read it in 2011 and when HarperCollins Canada asked me if I wanted to review their latest book, The Wolves of St. Peter’s, a historical thriller set in Renaissance Rome, I couldn’t say no. I loved that book too so I jumped at the opportunity to interview Gina and Janice for my blog.

Hello ladies!  I understand that you originally met in a French class and that not long after you decided to form your own author’s group. This year you’re celebrating 10 years of writing together, congratulations!

Thank you! We can’t believe ourselves that we’ve been writing together for more than a decade.

At this point in our writing career, it would be finding enough time to do all the research and writing we want to do! The minutiae of life can really get in the way.

We’ve both been to many of the locations of our books independently (Paris, Rome, Florence, Euganean Hills – although neither of us has ever been to Urbino, a key setting in The Sidewalk Artist). For the first time ever, we took a research trip together to Venice in January 2013. Gina spent a week there, while Janice stayed for a month. We did a lot of thinking about our next novel, a sequel to The Wolves of St. Peter’s. It was an excellent chance to soak up atmosphere while working on the plotting and characters.

Yes, it certainly seems to be our favourite country to write about! Gina has an Italian background, which perhaps partly explains her attraction. Janice visited Venice for the first time about 15 years ago and fell in love with the place – she has gone back every other year since then, renting an apartment for a month at a time. Plus, the scenery in Italy is spectacular, the food delicious, and who wouldn’t love a place where you can start drinking wine before lunch?

We wrote about Renaissance Italy in our first novel, The Sidewalk Artist, though it was basically by accident since the artist Raphael ended up being a major character. After moving to the World War II-era for our second novel, Ciao Bella, we realized we much preferred writing about a time and place further back in time. We strive to be as historically accurate as humanly possible, but it is nice to write about a period where no one is still alive to correct you. Plus, we already had a working knowledge about Renaissance Italy and wanted to dig into it deeper. There’s so much wonderful fodder for a great mystery.

research for The Wolves of St. Peter’s. The Renaissance is often quite romanticized, but essentially you would not want to live any other time and place than the developed world in the 21st century. One especially interesting fact came out of Steven Pinker’s book, The Better Angels of Our Nature: Why Violence Has Declined. The outhouses of the Renaissance rang with the sounds of dying newborns. That was because women had no access to abortion and had to resort to infanticide for unwanted babies. According to Pinker, the modern-day rates of abortion parallel the infanticide rates of the past. Whatever your views on abortion, that’s certainly something to think about.

That’s like asking which of your children you love the most! Anyway, we really enjoy The Turk, despite how despicable he is. Based on Silvio Berlusconi, he’s the guy we love to hate. We do love Dante the bat man as well as have a very soft spot for Susanna, who is just trying to make her way in this world so unfriendly to women.

Our next novel is a sequel to The Wolves of St. Peter’s, the second of an envisioned trilogy, and it will take place in Venice, at a time when dowry inflation was skyrocketing. Patrician families were only able to marry off one of their daughters, and the only other respectable position for a woman was a convent. So the nunneries of the city were filled with women who didn’t want to be there, which certainly makes for fascinating social dynamics.

Boy this is a hard one – it’s a completely inspirational city. We touched on Venice in our first two novels but obviously not The Wolves of St. Peter’s, which is set exclusively in Rome. The sequel will take place during a Venetian winter, which is a very mysterious time in the life of the city. When we went there last January, fog often hung just above the canals, and several times we heard the aqua alta sirens, which warn about potential flooding. The streets were damp, and the churches were often as cold as a tomb. And yet in the shops and restaurants and cafes, there was much warmth and light. It was a wonderful contrast.

We’re really looking forward to this event. We’ll be talking about our coauthoring process as well as our research into Renaissance Rome about art, the Vatican, Michelangelo, Raphael, and the role of women.

10. Are the canines in your Facebook banner photo real wolves?

The dogs in our author photo are Tamaskans, a type of husky from Scandinavia. Our photographer friend owns them, and we thought they would be a perfect addition, given the title of the book. It was quite the photo session at Fort Henry getting them to cooperate!

Thank you very much Gina and Janice for this wonderfully interesting and informative interview. I look forward to meeting you in person at your book signing event at Chapters Kingston on Saturday, September 28, 2013 (between 12:00 – 3:00 pm)!