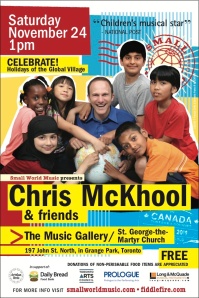 All funds raised at the concert are being donated to ArtsCan Circle & food donations for the Daily Bread Food Bank (information about both charitable organizations below).

“Celebrate! Holidays of The Global Village” is an interactive and playful musical journey into the myriad of holidays, customs and festivities enjoyed in the North-American Fall and Winter. Children will learn traditional and original songs encouraging them to share our diversity with neighbours and friends.

Inspired by travels across Canada and around the world, “Celebrate!” is a groundbreaking collaboration with musicians from diverse cultures. It features songs about holidays from across the globe that are celebrated here in Canada, including Bodhi Day (Buddhist), Carnival (Quebec), Chanukah, Chinese New Year, Christmas, Diwali, Eid, Indigenous traditions, Kwanzaa, Ramadan and Winter Solstice.

“Celebrate!” was developed as a response to the lack of programming for young audiences and families that integrates diverse cultures and holidays into one coherent vision.  While there are many worthy public concerts and programs that take place in the fall/winter holiday season that celebrate specific holidays such as Christmas, Chanukah, Diwali etc, there is no concert program in Toronto that aims to bring so many holidays together under one roof in this way.

Hailed as a “Children’s musical star” (National Post) and “Canada’s greatest eco-troubadour for young people” (Mississauga Living Arts Centre), Chris McKhool is one of Canada’s greatest musicians for young audiences. He has been touring across Canada with his family concerts for over ten years, reaching almost 1 million youth, and has appeared on Mr. Dressup, YTV’s Treehouse, TVOntario’s Crawlspace and the CBC. Chris is also a 3x Parents’ Choice Award (U.S) and Green Toronto Award of Excellence recipient.

“Chris McKhool and the boys were fantastic. They can play my bar mitvah!” ~ Bob Ezrin, Producer (Pink Floyd, Kiss)

“I was impressed by his musical virtuosity and personal appeal…His songs succeed!” ~ Ernie Coombs (Mr. Dressup)

“Many have tried but none have come as close to capturing what it means to truly celebrate multiculturalism as Chris McKhool. The Toronto singer-songwriter epitomizes what many Canadians have come to love about this country.” ~ Deanne Fisher, City Parent

ArtsCan Circle sends teams of musicians, artists and instruments to engage children and youth in Northern Indigenous/First Nations communities. Through music and other creative arts, they work to share new skills, promote self-esteem and creative self-expression.  Musical instruments, art supplies and recording studio equipment have been brought to the communities to facilitate young people finding their own voices and creating their own art and music.  ArtsCan Circle now provides over 2,000 workshop opportunities for indigenous youth annually.  Countless volunteer hours help raise funds to send the teams north and create connections between communities in southern Ontario and across Canada with our neighbours in the far north.
http://www.artscancircle.ca

The Daily Bread Food Bank is fighting to end hunger in communities across the Greater Toronto Area. As the hub of the food bank community in Toronto, Daily Bread supports over 170 member agencies in running different kinds of food relief programs. Their agencies run neighbourhood food banks where people come to access food hampers, as well as meal programs where people can access prepared meals such as soups or casseroles. Daily Bread is non-partisan and all-inclusive, and of the belief that no one in our communities should go hungry.
http://www.dailybread.ca