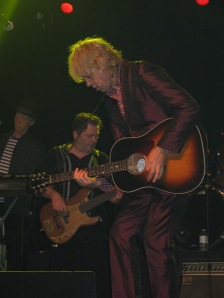 This review is a little late in coming as I saw Bob Geldof in concert last Tuesday night at The Empire Theatre in Belleville with four of my closest girlfriends, but the sheer enthusiasm and joy I felt after witnessing my 5th Geldof concert has not waned one iota!  So I must tell you about it!

I’ve been a fan of Sir Bob’s for over 30 years and have had the pleasure of making some pretty wonderful online friendships (most notably with Julie Koretz, administrator of the Bob Geldof Fans Facebook page who I have been friends with for 10 years) because of a mutual appreciation for the man and his music.  The former leader of Irish punk rockers The Boomtown Rats (1977-1986) is better known for his humanitarian and business endeavours than he is for his music, but make no mistake, this man puts on one of the THE BEST rock shows you are ever likely to see!  I’ve seen some pretty impressive bands including U2, Bruce Springsteen & The E-Street Band, The Clash, David Bowie,  Elton John, Roxy Music, Iggy Pop, The White Stripes, Lenny Kravitz and Matchbox Twenty to name a few, but no one, except for U2 & Springsteen can hold a candle to a live Geldof performance.

In the days leading up to Geldof’s performance in Belleville, Ontario he and

the band played shows in Hamilton, St. Catharines, Oshawa and Ottawa.  Bob was interviewed by everyone from the CBC to The Napanee Guide’s Jim Barber (a personal friend of mine) and I got more and more excited about seeing him again.

On the night of his Belleville show, I was reminded that Geldof’s band is absolutely superb!  Guitarist Johnny Turnbull, bassist Pete Briquette (The Boomtown Rats), keyboard player & accordionist Alan Dunn, drummer Jim Russell, percussionist Niall Power and violinist Vince Lovepump (aka Bob Loveday) are as tight and professional a group of rockers as any of the artists I listed above. Not only are they each talented players, but they are so comfortable with each other and with letting Bob have all the limelight that they should be commended for standing by him for so many years.  Niall Power

was quoted in an Irish newspaper article last year as saying, “Just let’s say that he doesn’t suffer fools gladly,’ Niall laughs. ‘We’re still friends after all these years so I must be doing something right.”

Then there’s Bob himself.  His unmistakable voice is still as strong and fierce as ever and can be equally soft and tender when the song calls for it.  He never stops moving on stage, sometimes padding back and forth like a caged tiger, arms waving in the air to express emotion in a song or while simply dancing back and forth on the spot like a whiskey-soaked gypsy.  As most people would assume, the verbose Geldof is a master storyteller and his rapport with the audience is second to none.  Whether he’s retelling the story of the inspiration for the song “Scream in Vain” and about how sweet potatoes/yams could feed a whole village in Africa or complaining about his hotel in Belleville being at some crossroads on the edge of town where there’s nothing but a Dollarama, he holds an engrossed audience in the palm of his hands.  He’s not above telling you to fuck off either (he told me to fuck off when I complimented Briquette in his presence after the show…but he said it with affection!) but when he smiles or laughs and those dimples are flashed, women are still melting in his 61-year-old presence.

And I can’t forget to mention the singularly charming anomaly that is Vince Lovepump.  He’s a premier violin and mandolin player but you tend to forget about the notes he’s plucking from the strings because you’re fixated on the crazy, mesh wife-beater shirts that he’s so fond of wearing.  His appearance in Geldof’s joyful trampoline jumping video for “Silly Pretty Thing” makes my BFF Jen & I laugh every time.  In it, Vince and Bob run through a wheat field propelling their arms like airplane wings before Bob jumps on the trampoline to show off his acrobatic prowess while Vince plays the violin beside him, wearing a white mesh wife-beater

with a big stain on it.  It’s hilarious!  (Vince is a benign Ray Winstone.)  And on Tuesday night, Vince’s shirt had a hole in it.  Jen & I are seriously thinking about taking up a collection for him to buy him some new shirts!

Bob’s released 7+ albums with The Boomtown Rats and 5 solo albums since 1977, the latest being 2011’s How To Compose Popular Songs That Will Sell, the ironic title of which is not lost on him.  On Tuesday night he performed selections from the Rats discography (“Banana Republic”, “Joey’s On The Street Again”, “Mary of the Fourth Form” and the classic “I Don’t Like Mondays”) and his solo repertoire – mainly from his last two albums – (“One For Me”, “Scream in Vain”, “Mudslide”, “Systematic Six Pack”, “Silly Pretty Thing”, “Dazzled By You”, “Mary Says” among others) opening and closing the show with “The Great Song of Indifference”, one of my all-time favourites.

as much as I was and they were!  Only Jen had seen Bob before and knew what to expect, but Tracie, Nicole & Kelly were blown away by how fantastic the concert was.  They were all grinning from ear to ear.  I wanted to dance throughout the whole show.  As it turned out, I joined the crowd at the edge of the stage for the encore and danced at that point, beaming with rapture, and laughing at a middle-aged man who was in Geldof’s words “going apeshit” while pounding the stage to get his attention.  He wanted Bob to sing a song for his brother who was celebrating his birthday and Bob obliged with the beautiful “Mary Says”. 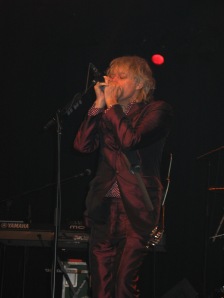 After the encore (several standing ovations were given to the band during the evening), the die-hard fans waited around for Bob to come back out to the front of the stage to sign autographs and pose for photos, which he does so graciously, and I’m quite sure he has a lot of fun doing it.  It’s hard to not want to have more than 30 seconds or so to talk to the man, but he always makes his time with you memorable.  Tracie asked him to sign her ticket so that it would say Happy Birthday to her as she’d just celebrated her 47th birthday.  Bob was gobsmacked at the fact that she was that old (with a 20-year-old daughter) because she doesn’t look a day over 30 and told her that he didn’t believe she was 47.  Needless to say, she’ll never forget that!

I was waiting in line to get Bob to sign a copy of his Live Target CD that I’d purchased from his tour manager Willo earlier in the evening, and saw Pete on the stage.  As he’s a Facebook friend, I called out to him and introduced myself, saying that I was Christine from Facebook, and Bob turned around and said “You’re Christine!” as I believe he realized that I’m one of the administrators of his Facebook fan page, along with Julie (Jules) and Irene Clayton.  I said, “Yes, I am,” and asked Pete to sign my CD.  So he laid down on the stage and Kelly suggested that his pose would make for a great photo and I replied, “You’re right!  Pete does look good!”  And that’s when

Bob told me to fuck off.

Bob & Jen had a conversation about Facebook and he said that if she was his friend on Facebook that he’d delete her and that in fact, he’d have a great time deleting people on Facebook!  He is gleeful when “taking the piss out of” someone.

When it was my turn to talk to Bob, he asked me when the last time was that I’d seen them play and I told him that it was in 2003 in Dublin at Vicar Street (he declared his love for the venue) and that I’d seen him in Quebec City the same year and that Jen & I had met him at the Palais Royale in Toronto in 2002.  So Bob replied with, “So you’re like stalkers then!”  I’m telling you, you haven’t lived until Bob Geldof tells you to fuck off and calls you a stalker!  Seriously Bob, I only get to see you every 10 years 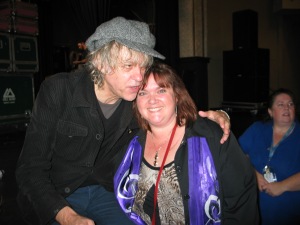 so that’s hardly grounds for being one!

We all had such a great time that it was hard to leave but it’s only fair to let all the fans who were waiting have their time with Bob and Pete told me that they might just come back to Canada next year to play some more shows.  We can only hope!

If you ever get the chance to see Bob Geldof live in concert, DON’T MISS IT!!! He will undoubtedly exceed your expectations in every way. 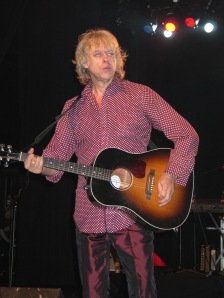 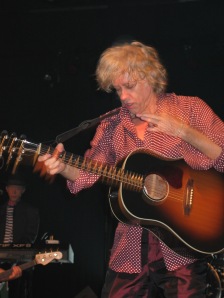 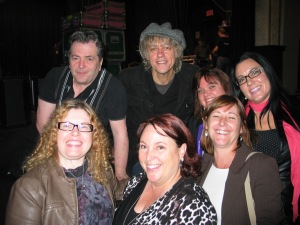