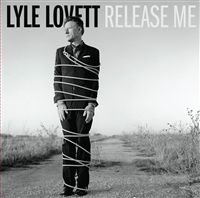 Release Me is Texan singer-songwriter Lyle Lovett’s 15th album.  I remember playing Pontiac (1987) when it was first released over and over…couldn’t get enough of his saddle smooth voice, wry sense of humour, and superb medley of genres.  I followed him quite closely throughout the release of his following four albums (Lyle Lovett and His Large Band, Joshua Judges Ruth, I Love Everybody, and The Road To Ensenada), and saw him in concert in Vancouver in 1995.  However, for some inexplicable reason, he fell off my radar for quite a while and I’m not familiar with the music he made after 1996.  I guess I was missing him.  After giving Release Me a good listen I remember why I loved him so much.

While Release Me doesn’t mean as much to me as the previous recordings I mentioned, as Lovett mostly covers other people’s songs here, it does have a few gems among its generous 14 track listing, that span from dour to droll, as well as a couple of Christmas songs which were, truthfully, a bit mystifying.  The CD’s black and white artwork features Lovett looking forlorn, standing on a country dirt road, bound by a very long piece of rope which is more than likely a metaphor for the place he now finds himself in his career.

Release Me opens on an upbeat note with a rollicking country instrumental reel highlighted by Luke Bulla’s fiddle called “Garfield’s Blackberry Blossom”.  Immediately your toes start tapping and they don’t stop as it segues into the title track, “Release Me”.  The country classic is interpreted by Lovett and k.d. lang, but for all intents and purposes is one of two throw away tracks on the album in my humble opinion.  I’m a big fan of k.d. lang too, but this is neither lang’s nor Lovett’s most memorable performance.  However, I’m completely captivated by “White Boy Lost In The Blues”, a sexy, cool blues number with harmonies by Arnold McCuller and Dean Parks’ slick electric slide guitar.  It’s my favourite track and I could push repeat on my iPhone and listen to it all day long!

Track 4, which I thought was a little out of place and could be classified as another one to toss, (though it’s certainly not bad) is the jazz standard, “Baby, It’s Cold Outside”, a Christmas duet with Kat Edmonson.  Later on in the album (Track 11), Lovett offers up his own Christmas song, “The Girl With The Holiday Smile”, a New Orleans style, boogie-woogie about a hooker in a grocery store.  Love it and will most certainly add it to my holiday playlist, but still can’t understand why he’d put Christmas songs on an album released in February.

Lovett is no stranger to the relationship blues and we hear more about them in the pretty and poignant ballads “Understand You” and “Dress of Laces”, a heartrending murder epic featuring harmony vocals by Sara Watkins.  He’s always been a master storyteller as well and spins more familiar yarns with “Brown Eyed Handsome Man” and “One Way Gal”.

“Night’s Lullaby” is exactly that, a lullaby with backing vocals by Sean and Sara Watkins (of Nickel Creek) while “Keep It Clean” is a Traditional standard arranged by Lovett featuring upbeat jazzy blues with whimsical, jaunty lyrics.  “Isn’t That So” is exceptionally good swinging, soulful blues that scream classic Lovett and is another favourite of mine on the album along with “White Freightliner Blues”, a frenetic country blues duet with Keith Sewell & Luke Bulla, written by Townes Van Zandt and featuring some fantastic drumming by Ross Kunkel.  Release Me closes with the gospel piano ballad, “Keep Us Steadfast”, written by Martin Luther featuring Luke Bulla on harmonies, but it’s a track I could have done without as I’d rather the album ended on a more exulted note.

Singer-songwriters as intelligent and charming as Lyle Lovett are as rare as white tigers, but I prefer to hear him sing his own songs.  Regardless, I’ll love Lyle’s style forever.  Release Me is definitely worth listening to and it’ll be interesting to see what he does as a free agent, now that his contract with Curb has ended and a new chapter is waiting to begin.