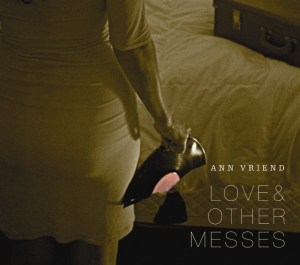 I should have written this a LONG time ago but I generally don’t review the work of my clients once they’ve become a client as this could be seen as a conflict of interest and undermine the influence of my opinions, for all they’re worth.  However, I have to make an exception in the case of Ann Vriend’s Love & Other Messes.  Critically acclaimed by numerous major Canadian newspapers & publications, listed on CKUA Radio’s Top 100 of 2011, honoured among The Ottawa Sun’s Top 7 Indie Album Picks for 2011, and following successful Canadian, Australian, Dutch & German tours to showcase it, Love & Other Messes is one of my top two favourite CDs of 2011. I’m declaring this because Ann’s a superb talent and not because she’s my client.  I started out as a fan and I’ll be one of her biggest fans forever!

Love & Other Messes, Vriend’s 6th album since 2003, is a collection of 12 exquisitely crafted songs, punctuated by Ann’s unique and easily recognizable vocals, that can’t be defined by one genre.  It falls somewhere between pop, soul and Americana, and opens with the country ballad “Everybody Sings in Nashville”, a song with backing vocals by Coco Love Alcorn & Chloe Albert that should have been a hit in Nashville and would be if Dolly Parton sang it.  (There’s still hope!)  “Best Thing” is a sophisticated, upbeat pop ditty with echoes of Motown careening through it, also supported by the very gifted Alcorn & Albert, and highlighted by Ann’s keyboards as well as Alcorn’s trumpet and the distinguished organ of David Aide (which is the case for every track).  James Forrest contributes bass, Robin Pelletier and Alan Wall play guitars and Thom Bennett adds drums throughout.

“Don’t Cry” is a revamped, stripped down version of the same pop ballad that was over produced on Vriend’s 2nd album, Modes of Transport.  This is by far the superior version of the song but it’s one of my least favourite tracks on Love & Other Messes.  “The Way You Let Me Down” is bluesy pop with some of the best playing by the musicians on the album not to mention a prime example of Vriend’s spectacular ability to hit some really high notes!  The blues make another appearance on “Possession Blues”, a simply produced song with only piano, guitar & vocals, and its’ recording reminds me immediately of Robert Johnson.

“Excuses No. 1-8” is a stark, plaintive piano ballad depicting various excuses one may give for not wanting to marry that certain someone while “More or Less” reiterates the importance of accentuating the positive while gently letting a lover down by not lying to them about your feelings.  “Tin Man” is a splendid ballad, using a brilliant metaphor from Oz, the likes of which you may have heard from the star that is Jann Arden.  Love is messy after all.

“Graffiti On My Heart (You Must Not Love)” is the only song of its kind on this CD, recorded live with a gang of vocal participants who carry on the bracketed refrain, and with its memorable gypsy/carnival romping sing-a-long gives Ann a reason to play the kazoo when she plays it live.  Sheer fun!

There are so many great tracks to choose from that it’s hard to pick a favourite.  I have three favourites including the sultry & divine duet with Matt Epp, “If You Were Here”, a ballad dedicated to the incomparable Jeff Buckley; “Long Distance Call”, another impressive ballad with background vocals by Epp that reminds me of someone special from my past; and my very favourite, the gospel charged call for divine assistance that should impress even Van Morrison and was my mantra for 2011: “Somebody On The Ground.”

Love & Other Messes’ CD packaging design by Simon Farla is the best of all of Vriend’s collection and offers a 28 page lyric booklet with terrific sepia tone photographs featuring splashes of washed-out vermillion.  Oh, and I was very honoured to be mentioned in her Thank Yous too.

You will honestly be hard-pressed to find many other female, Canadian singer-songwriters who aren’t already a household word who deserve to be more than Ann Vriend.  If she stays true to her own vision and continues to write classy songs of this magnitude, I have no doubt that she will be a Canadian music legend some day.