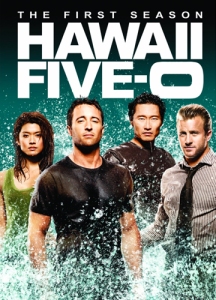 When I was a kid in the 1970s, I was a huge fan of the original Hawaii Five-0 created by Leonard Freeman, starring Jack Lord and James MacArthur.  I used to beg my father to let me stay up and watch the show with him and most of the time he let me.  My crush on Jack Lord was a bit bizarre for a kid my age (10-16) but even then I knew he was the coolest guy on television, surpassing even Lee Majors’ Six Million Dollar Man.

The theme song for Hawaii Five-0 is undoubtedly the coolest ever in the history of television.  I was thrilled that the producers of the new Hawaii Five-0 decided to stay true to the original when they re-recorded it for the 2010 series as it’s so immediately identifiable and positively rockin’!

The show opens with Steve’s father, John McGarrett (William Sadler) held hostage at gun point by Victor Hesse (James Marsters), a man McGarrett has been tracking for five years and who is involved in all kinds of evil business including human trafficking, and we soon find out he’s connected to the sinister Wo Fat (Mark Dacascos).  Steve has Hesse’s brother in custody and is transporting him to prison when his military convoy is attacked by a helicopter bomber sent by Hesse.  During the chaos that ensues, Steve ends up shooting his brother in self defence.

The pilot episode is more like a movie than a television show – shot on a grand scale – it’s completely riveting to watch from the first scene to the end.  The look on Steve’s face when he calls Hesse and realizes that he’s going to kill his father is completely realistic and I can think of no one better to play McGarrett than Alex O’Loughlin.

Jean Smart (24 & Designing Women) plays Governor Jamieson and after John McGarrett’s death she asks a reluctant Steve to put together a task force to help him find Hesse as well as other major criminals in Honolulu, with full immunity and means, allowing his rules, her backing, and no red tape.

Daniel Dae Kim, who portrays a very hip & cool Chin Ho Kelly, is definitely the sexiest Asian man alive and he is as important a part of the cast as O’Loughlin and Caan.  Chin Ho has been fired from his job with the Honolulu Police Department after a gruelling Internal Affairs investigation for a crime he didn’t commit.

Scott Caan plays Detective Danny Williams, a displaced Jersey cop who is living in Hawaii to be close to his young daughter Grace (the weak link in the series as child actor Teilor Grubbs is not good at all), with whom he shares custody with his ex-wife Rachel (Claire van der Boom).  I’ve never been a fan of Caan’s but he has won me over completely with this role.

Williams and McGarrett first meet when Steve is searching through his father’s garage looking for clues as to what he was involved in at the time of his death and Danny is investigating John’s murder.  They pull their guns on each other and their uneasy alliance and quippy repartee begins as Steve accepts the Governor’s proposal over the phone and forces Danny into becoming his partner.  Danny gets shot in the arm on the first day he works with him.  They team up with Chin Ho and his cousin, former surfing champion and new cop, Kono Kalakaua, as well as a former confidential informant who now runs a shaved ice business: the Sumuesque but beatific Kamekona (Taylor Wily).

This brightly photographed show primarily proffers style over substance, sporting a myriad of shots of sunshine-lit landscapes, surfers, hula dancers, King Kamehameha, the city of Honolulu’s lights at night, fist fights, martial arts moves, car chases, gun fights and explosions, although the recurring theme of McGarrett’s quest to find his father’s killer is an interesting one that will keep you watching.  It’s the secondary storylines that involve kidnapping, drugs, illegal gambling, gang wars, murders, prison breaks, government conspiracies, prostitution, armoured car heists, etc. that don’t really offer the viewer anything new from what they’ve seen in a hundred dramatic television series that have come before.  What makes this series slightly above average is the chemistry of the principal cast.  There is very strong character development throughout Season One and we get to know the main characters very well.

Danny is still in love with Rachel (although she’s remarried), Steve has a lover named Catherine who is in the Navy that he sees infrequently, Kono can kick serious ass for a skinny surfer chick, and the magnanimous Chin’s covering up a family secret.  We’re also introduced to medical examiner Dr. Max Bergman (Masi Oka of Heroes fame) who is very eccentric and unique, but likeable, and CIA analyst Jenna Kaye (Larisa Oleynik).

Alex O’Loughlin is the finest piece of eye candy on Network television and when he smiles, which isn’t often enough, he lights up the screen.  However, the series doesn’t take itself as seriously as the original as it’s infinitely more humorous and not just in the scenes where Steve and Danny bicker back and forth more than an old married couple.  The show makes me laugh but usually not as much through the comic banter as during the farfetched stunts and “solutions” that are so highly unlikely, they’re laughable.

However, one of my favourite episodes is when Danny’s former partner is found murdered and he and the Five-0 team set out to exonerate him from the wrongful accusation made by Internal Affairs that he was crooked.  I love the way the team banded together to support Danny as it really shows the strength of their bond for the first time since Five-0 was formed.

Another excellent episode is “Hana ‘A ‘A Makehewa”, the Christmas episode in which Chin Ho is collared with a bomb by Victor Hesse (who 5-0 discovers is still alive although Steve had put two bullets in him and left him for dead) and Steve, Danny & Kono have to play beat the clock to get Hesse ten million dollars before he kills Chin.  They take the money from an HPD evidence locker, but later at the drop, Hesse throws it in a fire before Kono shoots him and Steve punches him out.  Hesse ends up in jail where he is visited by Wo Fat (the first time we meet him) who wants to know how close Steve is to finding out what his father was involved in at the time of his death.  Hesse answers, “too close”, and Wo Fat reiterates, “well we can’t have that.”  This episode sets up the second half of the season and the Wo Fat storyline is carried through to the cliffhanger ending of Season One.  While we don’t actually see a lot of Wo Fat, he is very significant to the main story arc, and the season finale is excellent and a shocker.

The DVD package for The First Season (also available on Blu-ray) is full of deleted scenes for each episode, cast interviews, commentary, and in-depth, behind-the-scenes features, including one about the legacy of Hawaii Five-0 that is particularly fun to watch.  Each episode has a Hawaiian name and after watching the special features I realized that I liked the show even more than when I watched it on television.  The primary writers, Alex Kurtzman, Peter M. Lenkov and Roberto Orci have done a fine job in paying homage to the original series (“Book him Danno”) while putting a fresh 21st century stamp on the new one.  Watching it however, has made me want to see the original series all over again and fortunately it is also available on DVD.

Hawaii 5-0 is plain, old-fashioned FUN television and I look forward to watching this exciting series for a very long time.  Aloha!