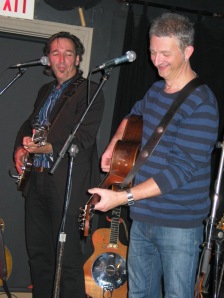 Last night I saw the Belfast-born, Melbourne-based singer-songwriter perform with his long-time friend, Dublin-born, Halifax-based, two-time Juno winner Stephen Fearing (Blackie and The Rodeo Kings) at The Acoustic Grill in Picton, Ontario.  The Acoustic Grill has great ambiance, acoustics, food and above all, spectacular music being offered there on a regular basis.  It may well be the best pub between Ottawa and Toronto and Kingston’s own Tom Savage Trio (alt-country/folk/roots rock) recorded an album entitled Live At The Acoustic Grill on Acoustic Jam Records’ label in 2008.

This was the fourth Andy White show I’ve seen this year.  I met him when he opened for the legendary Judy Collins in Kingston on April 22nd and immediately recognized the truth in the rave review my friend Paige had given me about his music.  I’ve also read Andy’s book, 21st Century Troubadour (5 star review coming – an On The Road for musicians), and his recent edition of poetry, Stolen Moments, and I really want to be asked to roadie for him so I can travel all over the world and listen to him sing every night.  I definitely have a thing for literary musician/poets and confess that I’ve fallen a wee bit in love with him.  The trouble is that troubadours don’t have roadies.  They’re all-in-one travelling music shows.

Although my friend Nicole and I missed the opening of Fearing & White’s show because we drove from Kingston, when we arrived we scored premium seats at the side of the bar and settled in shortly after 8:00 pm to listen to the single most impressive show of acoustic/electric, Beatles influenced, folk rock music I have ever heard (and I’ve seen Bob Dylan, Lyle Lovett & Damien Rice to name a few).  The intimate setting was accentuated by some great storytelling from Stephen as he tuned his guitar and witty banter and strange jokes from Andy (What does cheese say when it’s having its photograph taken?) that held the audience spellbound.  Their easy-going good nature and genuine camaraderie made for a delightful stage presence.

Earlier this year, Stephen Fearing and Andy White, who have been writing

songs together every summer at Fearing’s Guelph studio for the past eight years, released their eponymous, critically acclaimed, debut album Fearing & White, which I purchased this summer at one of Andy’s shows.  It has become my favourite album of 2011 and is chock full of 13 magnificent songs about love, loss and longing.  I think they played every song on the album: my favourites being ‘Say You Will’, ‘Heaven For A Lonely Man’, ‘If I Catch You Crying’, and ‘Rockwood’ as well as a few of their own songs.

“Fearing & White explores diverse lyrical terrain, though Andy reflects, “the album’s tone I find is one of yearning. It is emotionally bare, and coy and mysterious too. The songs will definitely keep you guessing.” Plus, as Stephen observes, “there is plenty of humour in there too.” For instance, the stream of conscious-psychedelia of the infectious ‘Silver Sky’, the breezy upbeat vibe of opening track ‘Say You Will’, the cod-Irish humour of ‘Heart O’ The Morning’, and the musically quirky yet haunting groove of ‘Mothership’.”

It was a night of music that made you feel as if there was nowhere in the world you’d rather be at that moment.  There was magic in the room and I believe the audience could feel it, or maybe that was me swooning over the sound of two stunning voices that complement each other so perfectly that you’d think they had been singing together forever.  Fearing & White are roots rock angels who should be declared a national treasure even though they belong to the whole world.

At the end of the night they received a thunderous round of applause that carried on long after they’d left the stage.  I helped carry a couple of guitar cases and wrap some cables before I realized that being a roadie isn’t very glamourous after all.  I’ll stick to buying their CDs, attending their shows, and chasing the dragon of music rapture I find myself entranced by while I’m there.