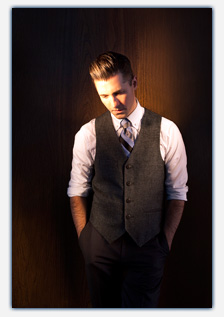 The fabulous ROYAL WOOD who is quickly becoming a fan favourite across Canada, is coming to the Octave Theatre (711 Dalton Ave.) in Kingston on Friday, October 7th at 8:00 pm.

Royal’s career trajectory is building one fan at a time through word of mouth, critical acclaim and impressive musical achievements.  He was nominated for Songwriter of the Year at the Junos, named iTunes’ Songwriter of the Year, Best Pop Album and Pop single, supported national tours with David Gray and Serena Ryder and landed song placements in TV shows like Grey’s Anatomy and Private Practice.  With the release of The Waiting, his most inspired record to date, an upcoming national theatre tour and more in the works, now more than ever Royal Wood is an artist on the rise.

Royal Wood’s calling card has always been the connection he’s cultivated with his fans.  With the release of his critically acclaimed Juno Nominated 2010 album, The Waiting, he hit the road, performing concerts in major cities and smaller communities, clocking an incredible amount of time on stage across the country.  In anticipation of his next studio album Royal headed out on his Sneak Peek Tour, starting in Winnipeg on September 18th performing new songs, old favourites and some unique covers in smaller venues across the country.

Royal says, “The Sneak Peek Tour will be an intimate way to let my listeners in on the secrets that have been brewing.”  Each night on the Sneak Peek Tour Royal will be performing songs that are under consideration for his 2012 new album.  Fans are encouraged to hit the world wide web (Facebook and Twitter) and give their opinion on what songs they think should make the cut. One would say that this is truly interactive!

The concept of the new tour was inspired by his fans’ involvement in choosing songs for the Cover Sessions EP.  While on tour last spring Royal decided to record a version of Foster the People’s Pumped Up Kicks.  After posting it on YouTube it was picked up by blogs and received unanimous praise for his unique recording.  The response was so fantastic that he decided to ask his fans what other songs they would like to hear him cover and after hundreds of suggestions he selected 4 additional songs to record.  The EP, Cover Sessions, was the result and it will only be available to fans that attend the tour this fall.

During the Sneak Peek Tour concert goers will be given the exclusive opportunity to pre-purchase a copy of the yet to be titled 2012 studio album.  The autographed album will be sent a week in advance of the official release.  They’ll also go home with a copy of Cover Sessions, which will only be available to people that pre-purchase the upcoming album at one of the shows.

Joining Royal Wood on tour will be Montreal born intrinsic rocker Danielle Duval who launches OF THE VALLEY this fall.  Produced by Carlin Nicholson and Mike O’Brien of Zeus (Arts & Crafts); delivered by a magnetically gutsy voice, the music is old school, harmony driven pop with an early rock n’ roll sensibility.