I almost needed to pinch myself last night to be convinced that I wasn’t dreaming.  I was standing 12 rows back from centre stage at the Spencerville Fair (and I’d never even heard of Spencerville until a few weeks ago), watching one of my favourite actors sing and play with his excellent, seasoned country rock band, Modern West! 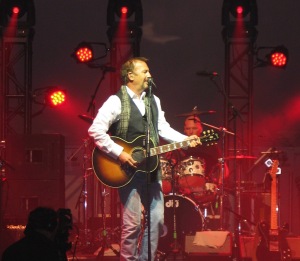 small town Ontario by playing at the Spencerville Fair and 3,000 people – from the surrounding small rural community – enjoyed every single moment of their show beneath two large white tents that housed an excellent sound system and a VIP-seated section for 200 in front of the stage.  The night was gorgeous with a full moon adorning the sky, a Ferris wheel and other amusement rides lit up in neon, the smell of livestock and corn dogs wafting through the air, and everyone in attendance in a very positive, if not slightly lubricated, frame of mind.

My friend Laura had purchased a limited advance VIP ticket for $100 (the rest of us paid between $30-$37) that allowed her entrance to a pre-show wine & cheese event that was supposed to be a meet and greet with Kevin Costner but as it turned out, although she was able to stand right next to him and a few people could ask questions, he wasn’t able to talk to or meet with everyone due to time constraints.

Ottawa’s Silver Creek opened the show with a scorching set that made me stand up and take notice of them and I’ll be sure to buy one of their albums soon.  Lead singer Shawn Tavenier, a striking ginger lad, led his band through songs from their soon-to-be-released Princes and Kings, and the crowd responded appreciatively.

Academy Award winner Kevin Costner has been playing with his close friends and band members John Coinman (guitar) and Blair Forward (bass) for over 20 years.  Urged by his wife Christine Baumgartner to reconnect musically with Coinman, the pair formed Modern West in 2005 and have been touring extensively between Costner’s movie commitments ever since.  Other members of the band include Larry Cobb (drums), Park Chisolm (guitar, vocals), Teddy Morgan (lead guitar) and Bobby Yang (fiddle) whose fiery fiddle performance last night briefly stole the spotlight from Costner, a larger than life man beast of love.

I’ve heard so many people exclaim, “Kevin Costner sings?!  I didn’t know that.”  While he may not have the best singing voice, it’s pleasant, distinctively his, and he is in no way embarrassing himself by performing with this experienced group of players.  It’s obvious that he’s a romantic at heart, but the songs are strong and can stand on their own and Costner’s passion for the music is always evident, along with his joy in being able to connect with his fans.

“For a long time now I have felt the need to connect with people in a more meaningful way than just the autograph. I have found myself here and around the world in different situations where the only exchange has been just that…a quick signature on the run usually followed by a “gee, he’s taller than I thought.”

I always thought that music could build a stronger, more personal moment for me. It would create the opportunity for a genuine exchange much greater than the movie, TV interview or magazine. It would be real, full of mistakes and without apology. But most of all there would be the chance to have some fun. The question was, would it work? I thought it could but I wasn’t really sure.”

Well, not only does it work, but it works better than most people would ever imagine.  Costner’s natural charm and charisma makes him the perfect entertainer.  He was very warm and friendly to the audience, blowing kisses, talking with his hands, telling stories about the songs, and even cracking a bottle of champagne to toast the audience with after the encore.  I have seen hundreds of concerts by some of the best bands in the world (U2, Bruce Springsteen, David Bowie) and last night’s intimate Modern West show was one of the best I’ve ever seen!  Not just because I was high on the fact that I was watching Kevin Costner in the flesh (at 56, he is still movie star handsome with a smile that turns my insides out), but because he and the band made it such a special evening and the audience in Spencerville rose to the occasion and let him know that they were grateful that he had come to play there.  Costner said that he loves playing in Canada, and last night he said, “I think this is the best audience we’ve had in a couple of years”, but I suspect he just loves to play wherever he can. 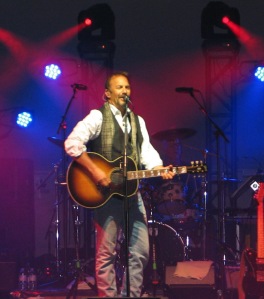 What About You!, Superman 14, Leland Iowa, Maria Nay, Indian Summer (coincidentally, Silver Creek played a song with the same title), Gotta Get Away, Angels Came Down, No Fences, Let The River Carry Itself, Find That Girl and The Hero.

Modern West will be releasing their third album, From Where I Stand, on Edel Records later this month.  I’ve been playing their first album, Untold Truths, to death ‘cause it is one sexy roots rock album filled with songs about relationships, people and the places they come from, as well as issues that move us all.  In fact, it’s perfect road trip music.

The band is now on their way to Europe with shows scheduled in France, Germany, Denmark and Sweden.

While other movie stars including Kevin Bacon, Jeff Bridges and Tim Robbins are also currently performing as musicians, my loyalty as a music fan will always go to Kevin Costner & Modern West.  If you have a chance to see them play, don’t miss it!!