Skip to content
Three weeks ago, I had the exceptionally good fortune to see Canada’s Darling of the Blues, Layla Zoe, perform in concert in Kingston, ON. I was so blown away by the amazing set of pipes and super cool stage presence possessed by this young woman that I wanted to learn all that I could about her and tell everyone about her fantastic music!

Lovely Layla graciously agreed to do a Q&A with me for Press +1 (which I am re-posting) and here’s how that conversation unfolded:

Layla, the night I saw you perform, you said that you were born to sing. I know that you’ve been singing since you were four years old, but how old were you when you realized that you had to pursue music as a career?

I guess I always had a natural drive and desire to be on stage from a very young age. I used to enjoy writing short skits and performing them for friends and family, as well as lip synching to songs I liked and dressing up in costume. I was always a very creative kid I guess. I sang in school musicals in high school, then performed in my dad’s band for a very short time at age fourteen, as well as playing around with friends who played instruments and doing a little busking on Granville Street (Vancouver). Then after moving back to Vancouver Island at age 18 I joined a cover band and played up and down Vancouver Island in local bars for 3½ years. All of these experiences helped me to grow as a singer/performer and contributed to my passion for music. But it was really when I attended the Hornby Island Blues Workshop in 2003 and met some of the best Blues artists in Canada who were teaching at the workshop, that I decided it was really time to break away from the cover band and start getting serious about my “career” in the Blues…

I can tell you now, that several of the teachers at the workshop that first year (Ellen McIlwaine, Suzie Vinnick, David Gogo, Doug Cox, etc.) said things to me which directly contributed to my decision to get serious about MY music. It always means a lot to me when my fans come up and say nice things at the shows, but I guess I have to admit that sometimes it means even more when my peers take the time to say supportive things. And many of the instructors at the workshop made a point of telling me how much they liked my voice, to keep on singing, and that I had the chance to have a career in music, if that is what I wanted. At the time, I was still quite young, and I greatly respected some of the musicians who were saying these things to me, so I guess it was the extra push/boost I needed to make some big changes/choices I had already been contemplating. I ended up leaving my cover band not long after that and began writing songs for my first album. I started going by my name and no longer a band name, and began working on my guitar and harmonica playing. The rest is history…because I have released an album every year as Layla Zoe since then, and have never looked back….

Are you a classically trained vocalist?

I have no classical training, although I did take one year of Jazz Vocal at Malaspina College in Nanaimo, BC, the same school and program where Diana Krall studied. But to be honest, life sort of got in the way of my being able to completely absorb and get the most from that year at school. I feel that I learnt more from the 3½ years I spent in my early cover band, than I did from the year at school studying Jazz Vocal. I guess for me, it was necessary that I get out there and actually see what it was like to be on stage every night in a different town, and to load the gear in and out, and sing until 3am, etc., etc…In my opinion that kind of experience cannot be taught in a classroom environment.

Do you rehearse before your live performances?

Depending on the show, of course there are rehearsals for the shows, so that everyone is comfortable with the material. But if you are asking if I warm-up before every show, then the answer is no. I probably should…But I tend to just choose the easier songs for the first set, which helps me to “warm-up” on stage. I leave the “heavier” songs for a little later in the show, so my voice is ready.

What are some of the techniques and remedies that you use to keep your voice in great shape?

Well, I smoke and drink, so not sure that I am very good to my voice sometimes, haha! But I sing every day which helps keep the juices flowing. And I use lemon, hot water, and honey, which is a very helpful remedy for when things get cruddy in the old wind pipe, haha! As a redhead, I also talk a lot, haha!! So that keeps my voice pretty warmed up.

Do you utilize a kind of ‘method acting’ to help summon strong emotions while singing or do they just come to you naturally?

I am completely unconscious of anything I am doing on stage when it comes to “pulling out the emotions”…I do not think about it, or try, it simply comes naturally. I feel that something takes over my body and I begin to “channel” the past, present and future pains I have experienced and am experiencing. It is all very difficult to describe. It’s just that the music takes me away, and sometimes it is almost hard to “come back” to earth after the shows. It takes me some time to get grounded after I perform. I give all of myself. I give my listeners my heart, on a platter…

You sure do, Layla! When you were growing up, did you listen to a steady diet of Blues music or were there also other genres in your collection?

I listened to a lot of Blues growing up because my father loved the Blues. I must thank him for introducing me to many of the musicians I still listen to and enjoy today. It was normal around my house to hear Robert Johnson, Muddy Waters, Billie Holiday, etc., during dinner time. But the Blues is not the only music I enjoyed at home as a child, or later on as a teenager and young adult. I have always been into MANY kinds of music. Everything from classical, to jazz, to death metal! I just love music…And at a young age I bought my first record player and spent more time with it, then with my friends. I have always been drawn most of all to the music from the 60’s/70’s period. I guess I was drawn to the lyrical content of bands from those decades and also the psychedelic/experimental nature of the music.

Who are some of your favourite artists right now?

Long list, but I will name a few here:

Do you have a favourite song that you’ve written? If so, can you tell us what it’s called and a little bit about the story behind it?

Hmmm, tough question. I feel good about several of my songs because they often express and showcase how I am feeling at the time and that is always changing from year to year. But I guess some of my faves are “Someday” and “Disappearing Delta” (off the album Shades of Blue), “Black Eyes Blacker”, “I Am Free” and “Soft as a Feather” (off the album Hoochie Coochie Woman) and the whole album “The Firegirl” which was a labour of love and has some of my best songwriting on it. However, I really feel that my newest album which I just made in Germany in December, 2010, has some of the best writing I have ever done. It will be released in the fall of 2011 in Europe and then Canada, and I think it is my best album yet…

You’ve met some of the biggest names in the Blues. Do you have any interesting or funny stories that you can share about any of your contemporaries?

Well, I have some stories, but probably some of them should not be told, haha! But for example, meeting Jeff Healey was a wonderful experience. He said some very kind things to me and performing with him was a highlight of my career. As well as saying some wonderful things about my voice, Jeff also said that he hoped I would have the chance to meet and work with BB King someday before he was gone. It was sad when I thought back to this comment after Jeff died, because he left us before BB in the end…But I do hope to meet and work with BB someday and Jeff’s belief in me really put things in perspective for me back then.

How did you end up meeting Jeff Healey and playing with him?

I was connected to Jeff through a mutual friend/musician named Danny Marks. I was working with Danny in Toronto performing at a few shows and then we both performed at Jeff Healey’s bar with Jeff. It was a great night and one I won’t soon forget. I then ended up performing again with Jeff, but this time without Danny there, and that was not long before Jeff passed away.

You said that you spend your pocket money on records. What are the last three records that you bought?

Well, the last treats I bought myself were:

The Allman Brothers “Dreams” box set on vinyl, which is rare and hard to find, as well as being a little pricey, but is totally worth every penny since it has tracks off all of their albums including the early stuff. I also bought Humble Pie’s album “Rockin’ at the Fillmore”, Ry Cooder’s album “Boomer’s Story” and Traffic’s album “On the Road” which is a really great record!

I tend to buy what I can afford, haha! But I really like Yellow Dune Bin 39, Barker’s Reserve, from Australia. It is affordable and very good.

What do you like to do when you’re not performing (aside from listening to records, etc.)?

I enjoy spending time with friends and family when I can, reading, writing, watching good films, travelling and of course, getting tattooed!

Are you working on a new album at present? 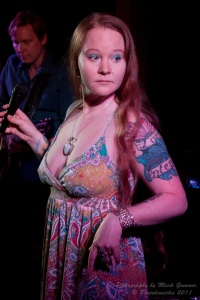 Do you play a lot of Blues festivals? I really hope that you can play the Limestone City Blues Festival in Kingston this August!

I love performing at festivals and have some great ones booked already in Canada and Europe this year. I would be happy to return to Kingston for some shows, so hopefully that happens. Sure was a great crowd there for me last time, and lots of support which feels great.

What are your touring plans for this year?

You can find most of my tour dates at www.myspace.com/laylazoe and I look forward to festivals in Belgium, Switzerland, Quebec, Halifax and Germany this year.

Thank you so much Layla for taking the time to talk to me and to share yourself and your love of the Blues with Press +1’s (and my blog’s) audience. I wish you much continued success with your music career and look forward to seeing you perform again soon!