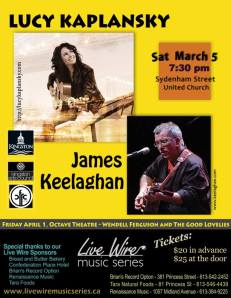 The Live Wire Music Series presents a blockbuster double-bill featuring New York City’s gifted singer/songwriter Lucy Kaplansky together with Canadian folk music icon James Keelaghan on Sat. March 5th at Sydenham Street United Church. This concert brings together two of the most respected voices in contemporary roots music in a beautiful venue that will showcase their enormous talents. Here are the details:

” Lucy Kaplansky is a truly gifted performer with a bag full of enchanting songs”. (The New Yorker)

Lucy Kaplansky began her singing career as one-half of a duo with Shawn Colvin. As a solo artist she has released 5 critically acclaimed albums with contributing back-up vocals from such folk luminaries John Gorka, Eliza Gilkyson and Richard Shindell. In 2000 she teamed up with Shindell and Dar Williams to form the supergroup Cry Cry Cry and turned out a masterful CD which garnered tremendous critical acclaim. She continues to tour extensively and her latest album, Over The Hills, has solidified her status as one of the most beautiful voices in roots music today.

“James Keelaghan is a voice in contemporary Canadian songwriting that has helped us define who we are as a people. He writes with great humanity and honesty, with an eye to the past and a vision of the future. He has chronicled his times with powerful and abiding songs, with heart and eyes wide open.” (David Francey)

Called “Canada’s finest singer-songwriter” by one of the most respected music journalists, Dave Marsh, James Keelaghan is an artist who has proven to be a man for all seasons. As the calendar pages have turned, for almost a quarter of a century now, this poet laureate of the folk and roots music world has gone about his work with a combination of passion, curiosity intent and intensity. His masterful storytelling has, over the course of nine recordings, been part of the bedrock of his success, earning Keelaghan countless nominations and awards – including a Juno and acclaim from Australia to Scandinavia.

His 11th CD, House of Cards, is another critical and artistic hit, full of the insight and tuneful songwriting that has made James Keelaghan a Canadian icon.