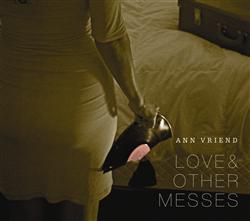 Folks, I am very happy to announce that my new album, “Love & Other Messes”, is now available for download via the link below. You can download the whole album and front cover artwork, or individual tracks.

I produced the album myself, co-produced with engineer Alan Wall and my bassist James Forrest. I have to say it’s the one I am most proud of to date, and I’m dying to know what you think of it!

1) the physical album will be available in a matter of days or even hours to order online, and it contains a 28 page lyric booklet which has blurbs about the songs and a lot of photos, as well as the lyrics and musician credits, and the whole package is made from 100% recycled material. So, you may want to wait to get the real deal vs the digital deal for only a few more bucks than downloading all the tracks. There will be a Paypal button posted on my website shortly, and on it will be an option to get it signed and/or a personalized message written on it by yours truly. Makes an excellent Christmas present if I don’t say so myself! (bias accusations accepted).

2) the album is going to be pressed on vinyl in a month or 2, and the vinyl album will come with a download card for the songs. It will cost about $25 – $35 because it costs a lot to manufacture them, but in case this is an option you prefer you might want to hold off til then. HOWEVER: the record on vinyl will ONLY BE AVAILABLE AT LIVE SHOWS so be aware of that!

By the way, my stance on downloading versus album sales is that while I don’t want to give away my music for free I think hey, this is the new medium, people want to have songs digitally, CD cases take up storage room, and as long as in general I can keep on making a living from music I am happy– which is the case so far, thanks to YOU. I feel very supported by the fans of my music so I’d rather have you download my music and pass on the word about it then never get around to listening to it because it’s too expensive/cumbersome to get the actual CD. My hope is that you’ll like the songs so much you’ll either come to a show, bring your friends, pass the music on to other people who will then become fans, host a house concert, or something else that puts $ into my pocket one way or another down the road. I do make some income from digital downloads so this little paragraph is to clear your consciences about downloading my music. Download away, and thanks so much for your ongoing support 🙂

I have one week of shows remaining in Deutschland. So far I’m having a blast! The concerts have been going really well and I am learning a (mostly unrelated) mix of German words, visiting castles and cathedrals, loving the lack of speed limits on the Autobahn, and slowly figuring out the Deutsche Bahn train schedules (still working on that one). Biegen sie links ab! Rot wein! Genau!

Here’s a list of my remaining tour dates in Germany. Full details for the shows are posted via the link below.

Danke to everyone in Germany who has made this tour so fun so far!

It’s on Sunday, November 28. Which, I just discovered today, is the same day that the Grey Cup will be held in… Edmonton. Argh! If only I was on top of Canadian football news I would have known this. But alas, I regret to say that I am obviously not on top of that, and my excuse is that I’ve been out of the country for a few weeks, and out of the province since the end of Sept. (But I did vote in advance for the municipal election, does that count for anything?)

Anyway, it occurred to me that not all Edmontonians are football fans, and so I have decided the unofficial title of this next Bluebird North Event will be: The Alternative Show to Men Jumping On Top Of Each Other For Fun And/Or Money”. (Or TASTMJOTOEOFFAOM, which admittedly is not the best acronym there ever was.)

It will be my first week back in Edmonton after a long hiatus, so, my fellow Edmontonians, do come by and say hello, and enjoy a show– in which I will be very surprised if anyone, male or female, jumps on top of each other. But it still will be entertaining– I’m excited about the line up and the shows are getting rave reviews from attendees!

I am the host and producer of the show, and will play a song at the beginning of each set, but in general it features 4 other songwriters from across Canada who will play 2 sets in the songwriters-in-the-round style. This show’s 4 featured songwriters are:

For advance tickets and complete details please visit this link:

ON THE DECKS DECEMBER AND ONWARD

Kelowna show and live internet streaming thereof on Friday, December 11 (deets via the link below). Looking for a house concert or 2 that same weekend as a duo with my bassist for the 10th and/or 12 in the Okanagan area, so if you’d like to host one let me know at booking@annvriend.com

Details are slowly coming together for each, so stay tuned and keep checking in!

Thanks for your support!