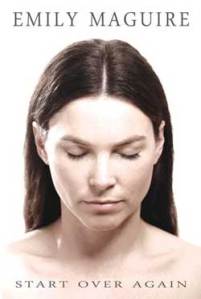 Emily Maguire is a beautiful young woman, a gifted singer-songwriter, a skilled maker of goat’s cheese, a person of above average intelligence, and a deeply spiritual human being who knows what it feels like to go insane. Emily Maguire has bipolar disorder, but rather than allowing it to disable her, she has chosen to see it as enabling her to be who she really is, even though it means she has to start over again after every breakdown.

Start Over Again is the title of Emily’s first book: a combination brief autobiography/collection of lyrics, poetry, prose and journal entries that tell the story of her very challenging but extremely interesting and ultimately rewarding young life, from 1991 (age 16) to the present (age 35). In only five short years, Emily has morphed from living on disability in London and having no idea about what to do with her life, to a woman who lived in a tin & potato sack shack in the Sunshine Coast of Australia with her lover, to a critically acclaimed singer-songwriter who has played the Royal Albert Hall and whose songs have been featured on BBC Radio 2.

I am a fan of Emily Maguire’s thoughtful lyrics and sun-kissed, sea-breezed, soothing vocals and ever since I first heard her song “Keep Walking” in 2008, I couldn’t help but adore her. With three albums to her credit, including A Stranger Place, Keep Walking and Believer, and tours across the UK with such prestigious and well known artists as Don McLean, Glenn Tillbrook & Roddy Frame, Emily has evolved from a young woman afflicted with intense fibromyalgia (resulting from a car crash when she was still a teenager) and manic depression into an eloquent, exquisite and valiant artist who has chosen to allow the world to take a look inside her head and to be an advocate for those too afraid to share their voice.

Emily’s courage in publishing this work is colossal. Start Over Again is an honest, poignant, often painful, but amazingly hopeful and positive message to anyone who suffers from depression or a mood/personality disorder. It is okay to acknowledge your feelings – to own them – to learn how to manage them and to take responsibility for your own health & wellness without being labeled as someone who is somehow deficient, less than, or broken.

As someone who suffers from episodes of depression and who comes from a family with a history of clinical depression, fibromyalgia, Alzheimer’s, and an inability to cope with significant stress, I have enormous empathy for Emily. I understand all too well what it feels like to wonder if you’re going mad and whether fighting to stay grounded and self-composed in this difficult but beautiful world is worth the significant effort. I choked back tears while reading Emily’s Foreward and found myself feeling deeply moved and reflective about my own journey.

Emily, who finds comfort in Buddhism, will give you hope when you read her story. She will reinforce the fact that being different from what society perceives as “normal” is something to be embraced rather than ashamed of. Emily’s willingness to open up about her drug use, mood management, and her stay in a mental hospital will undoubtedly encourage her readers to look at people they know who deal with similar issues in a whole new light. It’s so true that “suffering is something we love to watch from a distance.” But the truth is that none of us can make it through this life without help of some kind and a lot of love.

After reading Start Over Again you will hear Emily Maguire’s lyrics with different ears and her songs will become infinitely more meaningful. She hasn’t professed to have found the answer to her problems, but she’s absolutely willing to keep walking and persevere through her hours of darkness. She is a revelation.