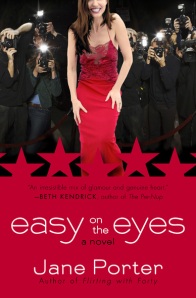 Damn you Jane Porter. You’re incredibly talented, as beautiful on the inside as you are on the outside, and your contemporary fiction always makes me cry! You are brilliant in every way and I love you.

I just finished reading Easy On The Eyes by Jane Porter and I’m sitting here sniffing and wiping the tears off my face. Her books never cease to touch my heart and to make me cheer for their complex, strong and intelligent female characters. Most importantly of all, they remind me of what is truly important in life, because Jane knows…Love. Not just romantic love, with the dashing, handsome and perfect leading man (although he’s ever present), but love of family, friends, and especially of self. This is the theme of her 2009 novel, as experienced by America Tonight’s beautiful, talented but aging on-air host, Tiana Tomlinson, who on the outside would seem to have it all, and she discovers in her darkest hour that she really does. She also realizes that she doesn’t need a man to complete her, can take responsibility for her own destiny, play by her rules, and follow her true path.

Jane Porter first introduced readers to Tiana Tomlinson in Odd Mom Out and one of the things I love about her books is that she takes secondary characters from each of her preceding novels and tells their story in future books. She will do the same this August when her latest novel She’s Gone Country about Tiana’s best friend Shey Darby hits bookstores everywhere in North America. Reading Porter’s novels are like taking a road trip with your best friend. You have a fantastic time and you never want them to end!

In Easy On The Eyes, 38-year-old entertainment television reporter Tiana is faced with the realization that she’s going to be fazed out of her hit show by a younger protégé if she doesn’t succumb to plastic surgery. In Hollywood this is a very real issue that women have to deal with all the time. It’s explored here from every angle but ultimately Tiana is the kind of woman who wants to live in her own face and appreciate every line she’s earned.

This is chick lit so naturally there is a dazzling and irresistible love interest for Tiana in the form of an ironic and adversarial Hollywood plastic surgeon, Dr. Michael O’Sullivan, who isn’t quite as shallow as he first seems. However, for me, the most relatable element of this story is the significance of relationships between women.

As women our friendships with other women are just as important to us as our relationships with our partners.

“Call me greedy, but I want both. Friends and romance.”
“I get that…And we should have both in our lives. Men are great, but they’re not women. Men will love us, but they’ll never really understand us, not the way our girlfriends do. And our men see us and love us in a way our girlfriends can’t. That’s why we need both.”
“Research shows that women with close friendships live longer and healthier lives than women without. Spending time with girlfriends is supposed to be one of the best stress busters out there.”

As someone who is chronically single, but who has learned how to love herself, I couldn’t agree more.

Widowed Tiana, whose reporter husband was killed in Afghanistan seven years earlier, before their first wedding anniversary, knows in her heart that there’s more to her than her pretty face and she wants to be seen for who she really is. Knowing that she needs to make a career change in her life before it’s made for her, she accepts Dr. O’Sullivan’s offer to go to Zambia to learn about an organization that he volunteers for called Rx Smile and to report stories of substance about the plight of the African people.

While the book is formulaic chick lit, Jane Porter gives her novels more substance and genuine empathy than any of her contemporaries whom I have read. She’s the equivalent of a spiritually enlightened Dallas Cowboy cheerleader for all of us:

“I craved change,” I tell them, “but was terrified of change, clinging, ever more tightly to what was familiar, to what I knew. But clinging to fear only increases fear. There’s only one way to fight fear and that’s by fighting back. Embrace change. Grab for the unknown. And believe in hope and joy and love.
“There isn’t just one kind of love, either,” I conclude. “And there’s more than enough love to go around. So love yourself, and love your life, and even love fear, because it won’t hold you back.”

That’s when my tears really started to fall because I’m in this exact place right now and I finally understand the meaning of the phrase, “feel the fear but do it anyway.”

I was hoping that the book would end with Tiana embracing her new lease on life and walking towards her future: strong, independent, and without a man, because in real life, that’s how some of our stories are, but again, this is chick lit and people buy it because they want the happy ending in which the heroine gets to have it all. And damn it, someday I want it all too.