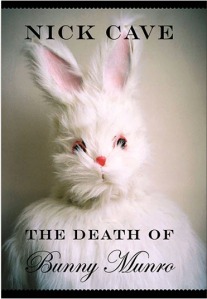 Australian rock star Nick Cave (of Nick Cave & The Bad Seeds) is an interesting, eclectic artist who writes fantastic lyrics so it is for this reason that I let HarperCollins know that I wanted to read and review his book, The Death of Bunny Munro. I have not read his previous book so had nothing to compare, but this was every bit as remarkable and unusual a black comedy as I expected it would be and once I started it, I couldn’t put it down.

Set in modern day England, this soft-porn tale of the seriously disturbed anti-hero, Bunny Munro, is a tragic one that unfolds with the fascinating curiosity of a train wreck. If this book was ever made into a movie it should be directed by David Lynch and star Vincent Gallo as Bunny.

Bunny Munro is a vagina-obsessed, social misfit who suffers from a major personality disorder but just happens to make his living as a door-to-door salesman of beauty products for the shadowy, enigmatic Eternity Enterprises. Bunny also happens to be a perverted man-whore who never ceases to look for a way to seduce the women he sells his beauty lotions to, much to the utter despair of his poor, long-suffering wife Libby, who is the mother of his 9-year-old prodigious son, Bunny Jr.

When Libby commits suicide, an inept Bunny finds himself having to figure out a way to look after his son. After a haunting by his dead wife in their apartment, he decides that he can’t live there anymore and packs up a few belongings, instructing Jr. to do the same (all he takes is a few clothes and his beloved encyclopedia that his mum gave him), and they head out on the road where Bunny embarks on a father/son bonding experience unlike any you have witnessed. He teaches him the tricks of his trade, like Bunny’s father did before him, all the while ignoring the fact that he is slowing sliding into Hell – where he rightfully belongs – face first.

Bunny Munro is not a character that you will have much empathy for and you know from the title of the book as well as its first sentence, how it will end. He’s a narcissistic, alcoholic, depraved mess of a human being who somehow manages to use his tiny bit of charm and twisted sense of humor to prey on lonely women with self-esteem issues. This explicit story, while challenging at times because you despise him so much, is also one in which you find yourself rooting for Munro’s precocious, innocent son, and wondering what kind of desperate women he’ll meet next, so you just have to read it until the end.

“With eyes downcast, he stands before the reflective square of stainless steel screwed to the wall above the sink. After a while Bunny finds the courage to raise his head and look at himself. He half expects some drooling, slack-jawed ogre to greet him there in the smeared mirror and is pleasantly surprised to see that he recognizes the face that stares back at him – warm, loveable, and dimpled. He pats at his pomaded forelock and smiles at himself. He leans in closer. Yeah, there it is – that irresistible and unnameable allure – a little bashed and battered, to be sure, but who wouldn’t be?

Then, on closer inspection, he sees something else there, looking back at him. He leans in nearer still. Something grievous has resided in his face that he is amazed to see adds to his general magnetism. There is an intensity to his eyes that was not there before – a tragic light – that he feels has untold potential and he shoots the mirror a sad, emotive smile and is aghast at his new-found pulling power.”

Written in third person narrative, The Death of Bunny Munro is shockingly different and definitely not the kind of novel that would normally scream bestseller. It’s peculiar and peppered with grim details of each character’s surroundings, with an ending that is anti-climactic and somewhat predictable, but I enjoyed the ride nevertheless. Nick Cave’s writing is dramatic and unforgettable and the moral scope that he explores within the characters of this book makes for a courageous author who should be celebrated with Dionysian fervor.

If you don’t want to read about a sex-addicted, self-obsessed misogynist, skip this book. If you can’t help but be curious, and you like dark, surreal stories like The Imaginarium of Doctor Parnassus for instance, you will probably enjoy this at least as much as I did.