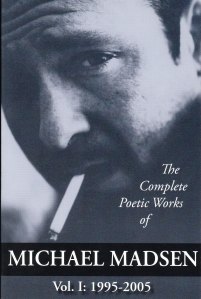 Michael Madsen is an actor who I haven’t met but feel as if I know because I’ve watched so many of his movies, read most of his books of poetry more than once and have been a card-carrying member of his fan club. 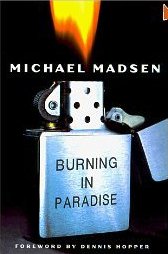 In 1998 Incommunicado Press published Burning in Paradise, Michael Madsen’s third book of poetry. (It’s hard to find the first two called Beer, Blood and Ashes and Eat the Worm – published in 1995 – so if anyone out there has copies they want to sell me, get in touch!) It went on to win the Independent Book Publisher’s Firecracker Poetry Book of the Year award. Madsen’s poems blew Dennis Hopper’s mind “with his drifts of gut-wrenching rifts”, his “street language” and “images I can relate to.” Incommunicado said “his writing is stark yet vivid; he’s been “shot, sewn up, blown up, x-rayed, drugged up, tied up, and locked up.” I always did love the bad boys.

I’ve written about Madsen before in different places but today I am re-inspired after finding out that he has a new volume of poetry available called American Badass (2009) and I somehow missed that fact until now. I’ll be getting it as soon as possible and will review it here.

Michael Madsen astonishes me with the way he makes the writing of poetry seem so effortless. Some of his shorter works feel like the flash of a photograph and similarly the images stay grafted to your mind: sharp, vivid and piercing.

“Life is for the living, but death is for the lucky. Why am I a raw nerve? Why must I see the immense sadness in everything?” It’s yin and yang, Michael. If not for the multitudinous shades of grey, how would we be able to perceive colour? This man feels life like he’s always walking on broken glass.

Some of my favourite poems from Burning in Paradise are: Rain, Dogs and Cats, Love, Man’s Best Friend, Kansas City, Prado, Movie, Christian, Walk, Tears (it reveals more about Madsen than all of his movie roles combined), The Crooked Prince, Bullshit, Out of Jack, The Dog, (Madsen seems to like dogs more than people; something we have in common) Although, James Cagney, Dad and Coles.

This complex, intense and gritty voice is as real as it gets. The man is a paradox. He’s raw, raunchy, scary…and he’s a true romantic. In his own words: “There’s a very fine line between good and evil and right and wrong.” After reading his poetry, I was forced to look at Michael Madsen in a whole new way. In fact, I think I fell in love. He turned me on to the late, great Charles Bukowski, and influenced my own poetry. For that I will be forever grateful. Michael would be the first to admit that he hasn’t always acted in A-list movies, but his poetry is absofuckinglutely A-list! I’d give anything to be able to tell him to his face how much I love his work and just how much he has inspired me.

A Blessing of the Hounds, Madsen’s fourth book of poetry (with an introduction by Quentin Tarantino) published by 12 Gauge Press, frequently focuses on all the shit going on in the world and one wonders if he just might fall off the edge except for his saviors, redeemers and raison d’etre: wife DeAnna and sons Cody, Christian, Max, Calvin, Hudson, and Luke. But it also showcases Michael’s humour. The Read Thru and Goosed made me laugh out loud. Others are touching, poignant, near perfect little gems. My favourites in this volume are: Toronto, Princeville, Death All The Time, Something, End, Quack Quack, Ernie, It’s All Good, Star Throwers and the last one in the book, Fairfax & Sunset. It was hard to pick just a few.

Michael’s fifth volume of poems is called 46 Down: A Book of Dreams and Other Ramblings and I didn’t enjoy it quite as much as the other two simply because I felt that the dreams and other ramblings weren’t as strong as the poems and at times felt too incomplete. To quote the late David Carradine in his Foreward to 46 Down, “He’s tough, all right, and he drinks a bit for sure; but he’s anything but cynical, and the chip on his shoulder is made out of something like cotton candy…Michael’s smile is like that of a fighter who’s been knocked down three times and is still ready to fight, but bears his tormentor no ill will…the guy is sweet.”

Michael’s sixth offering, The Complete Poetic Works of Michael Madsen: Vol. 1: 1995-2005 is superb, encompasses much of the volumes that came before, and is a great place to start when reading his work.

He’s so much more than just an actor: a father, brother, son, friend, poet, photographer and philosopher; a God-fearing, sensitive, tough guy who worries about the future for his children. Madsen is a man’s man whose heroes are the likes of Robert Mitchum, Jimmy Stewart, Charles Bronson, Burt Lancaster, Lee Marvin, Steve McQueen, Sam Peckinpah, and John Cassavetes, who coincidentally happen to be some of my father’s favourites too. Any man who can write a poem like this one is studying the Big Picture:

I never planned it that way.

God help the people I’ve hurt
and the birds that lay dead on the beach.

I never planned it that way,
although the bird thing was
out of my control.

I never planned it that way.

God forgive my evil thoughts
and God relieve my pain.

God bring some rain,
No man ever loved rain as much as I.

Rain, Rain, Rain
I never planned it that way.

I never really had a plan at all.

For a man who never had a plan, Michael Madsen hasn’t done too poorly for himself. Although he started out as a petty criminal and he’s seen more horror than he would have ever wanted, he now only plays one in the movies. Michael became an actor at Chicago’s Steppenwolf Theatre under the tutelage of John Malkovich. He’s probably best known for his portrayal of the brutal, ear-slicing Mr. Blonde in Quentin Tarantino’s Reservoir Dogs which changed the way we hear “Stuck in the Middle with You” by Stealers Wheel forever. That role alone is proof that he’s a dangerous, dynamic and compelling actor to watch. He’s the kind of actor that even when he’s in a crappy B or C grade film, he’s always the best thing about it. At 6’2”, the handsome, black-haired, blue-eyed, Jack Daniels & cigarette-voiced Madsen is most often cast as the heavy, but if you look back through his extensive filmography beginning in 1982, you’ll discover that he’s played a variety of characters, good, bad and indifferent. Michael Madsen’s career spans over 25 years and over 170 films.

Michael was born in Chicago on September 25, 1959, to Cal and Elaine Madsen. Cal was a career firefighter and Elaine is an award-winning writer and producer. He has two sisters – Cherie, who’s a restaurant owner – and the beautiful, blonde Academy Award Nominee, Virginia Madsen, (for Sideways) who I will always remember from the ultra scary Candyman and The Prophecy, movies in which she also shone.

It’s true he’s made some Gawd-awful movies, and some really kick-ass, smokin’ beauts, but unlike his screen idols he’ll be remembered, not for the blood he spilled on celluloid, but for the bloodshed on the page.

“Do what makes you happy,” baby. Read these books.