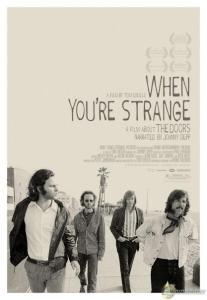 I don’t normally blog about movies but this particular film is an exception because it’s a documentary about one of my all-time favourite bands, The Doors, narrated by my favourite actor, Johnny Depp. As my good friend Tracie said, (and I concur) “It’s a win win for me!”

We’re going to see the special event screening of Tom DiCillo’s film on Thursday, April 15th, 2010 at 7:00 pm at the Cineplex-Odeon in Kingston. I’m very excited about this because I’ve been a big fan of Jim Morrison and The Doors for as long as I can remember, have read numerous books written about them and by them, and even had the privilege of meeting Ray Manzarek at a book signing in Toronto in 1999 when he was promoting Light My Fire: My Life With Jim Morrison and The Doors.

I am hereby joining The Doors Street Team (you can too!) and am going to pass along their information about When You’re Strange here. From the official website:

Following a prestigious festival run, WHEN YOU’RE STRANGE: A FILM ABOUT THE DOORS will receive a theatrical release in select markets on Friday, April 9. The crowd-pleasing documentary has been featured at the Sundance, Berlin, Deauville and San Sebastian Film Festivals and most recently played to sold-out shows at the Santa Barbara Film Festival.

Produced by Wolf Films/Strange Pictures, in association with Rhino Entertainment, and released by Abramorama, the 90-minute film is the first feature documentary about The Doors.

“They say if you remember the ‘60s you weren’t there,” said producer Dick Wolf. “I can state definitively that one of the things I do remember is buying THE DOORS first album the day it came out and then listening to it about ten or twelve times in a row. Both sides. Every song. I’ve been a fan ever since. This movie is the story of the band but it is also an insight into a moment in time that will never be repeated.”

WHEN YOU’RE STRANGE uncovers historic and previously unseen footage of the illustrious rock quartet and provides new insight into the revolutionary impact of its music and legacy. Directed by award-winning writer/director Tom DiCillo and narrated by Johnny Depp, the film is a riveting account of the band’s history.

Said Depp, “Watching the hypnotic, hitherto unreleased footage of Jim, John, Ray and Robby, I felt like I experienced it all through their eyes. As a rock n’ roll documentary, or any kind of documentary for that matter, it simply doesn’t get any better than this. What an honor to have been involved. I am as proud of this as anything I have ever done.”

The film reveals an intimate perspective on the creative chemistry between drummer John Densmore, guitarist Robby Krieger, keyboardist Ray Manzarek and singer Jim Morrison — four brilliant artists who made The Doors one of America’s most iconic and influential rock bands. Using footage shot between the band’s 1965 formation and Morrison’s 1971 death, WHEN YOU’RE STRANGE follows the band from the corridors of UCLA’s film school, where Manzarek and Morrison met, to the stages of sold-out arenas.

Shortly before the film’s theatrical release, its soundtrack will be available March 30 and features 13-songs chronicling The Doors’ six landmark albums with studio versions of classic tracks mixed with legendary live cuts including performances from The Ed Sullivan Show and The Isle Of Wight Festival.

The film is produced by Wolf Films/Strange Pictures, in association with Rhino Entertainment, and released by Abramorama. Additional credits for WHEN YOU’RE STRANGE include producers Dick Wolf, John Beug, Jeff Jampol, and Peter Jankowski. The film is written and directed by Tom DiCillo (“Johnny Suede,” “Living in Oblivion”). Narrated by Johnny Depp.