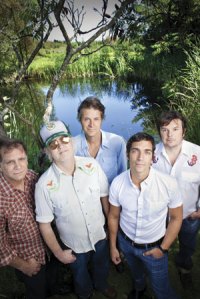 Blue Rodeo has announced they are embarking on a cross-Canada tour that will see them play 30+ venues starting off with two nights in Calgary, AB at the Southern Jubilee on January 5th & 6th. Tickets go on sale November 13th.

Warner Music Canada are releasing The Things We Left Behind, the band’s 12th studio recording, on Tuesday, November 10, 2009. With 16 songs spread over two discs the new album is the band’s most ambitious recording yet. The album will be available in a number of different configurations including two CDs, double vinyl and a special iTunes LP, a digital package that will include interactive album notes, exclusive photos of the band and portraits of their most prized instruments, a song by song commentary from Jim Cuddy and Greg Keelor and a special acoustic performance of four new songs from the album.

Over their twenty-five year career, Blue Rodeo has sold over 4 million records, won an unprecedented 5 Juno awards as Group of the Year, been handed keys to the City of Toronto and been inducted onto Canada’s Walk of Fame. But from arenas in big cities to theatres in small towns, there is nothing Blue Rodeo relishes more than playing music for their fans across the country.

A very special partner on this tour will be “Raise-A-Reader,” who will benefit from every ticket sold. The Canwest Raise-A-Reader Concert Series, presented by Country Inns & Suites By Carlson, was created with Live Nation so artists could lend their voices to support family literacy in Canada. Raise-A-Reader has raised over $15 million since the national launch in 2002. Partial proceeds from Blue Rodeo’s tour will be directed to help literacy programs across the country.