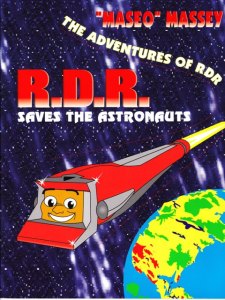 “After many years of living with the fear that space debris might collide with other spaceships or fall to earth in a populated area, man made something to combat the space junk problem. They called this incredible machine R.D.R. (Ram Deflector Rocket). So thus began “The Adventures of R.D.R.”

When I read “Maseo” Massey’s R.D.R. Saves The Astronauts to my 7 year old niece, Erika and nephew, Ethan – my prime audience for my children’s book reviews – they loved the book! R.D.R., or Ram Deflector Rocket, is a machine that moves space junk to the space junkyard in order to prevent it from falling to earth and wrecking havoc on our planet. One day when R.D.R. was busy moving space junk, it almost failed to notice that a space shuttle was about to fly into a huge meteor storm! The controllers at Space Central knew they had to do something fast to save the astronauts whose shuttle had been badly damaged, so they called upon R.D.R. to do its best to save the day, and after some serious concerns and a very close call, it did!

Erika and Ethan enjoyed the colourful, comic book style illustrations by Robert Kuzera and J. Benjamin Young, Sr. and think that R.D.R. Saves The Astronauts is a fun and exciting story. When I asked them what their favourite part of the book was, they replied, “When RDR saves the astronauts (of course!).” They told me that if it was a library book at their school, they would want to sign out the book and they would recommend it to their friends and tell them that it’s a really fun book about astronauts. This is straight from the mouths of the audience the book is intended for.

Author “Maseo” Massey has a rather interesting history that set him up perfectly for the telling of this story. Born in Tampa, Florida, Maseo was the son of a serviceman who completed tours of duty Stateside, as well as overseas. According to the bio on the back cover of the book:

“In 1977, he joined the United States Air Force as a Jet Engine Mechanic, on J79 and A10 Engines and all Now Power Age Equipment. He also served through “Operation Desert Storm” and then retired from the military in Tucson, Arizona.” A lifelong Mason, Massey also held office as the first Sergeant at Arms for the Martin Luther King, Jr. Memorial Society Inc. in Tucson and he studied Social Service at Pima College. “During that time he submitted a proposal to the U.S. Space Industry about an invention he thought might appeal to their interest. From this proposal came the birth of his book.

R.D.R. Saves The Astronauts, a perfect bedtime story written to inspire children’s imagination and their fascination with space and space shuttle missions, is the first in “The Adventures of RDR” series.