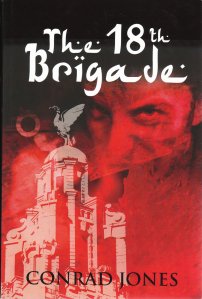 “The 18th Brigade is a stand-alone novel written by the author of the award winning ‘Soft Target’ trilogy [Readers’ Choice Award on Amazon.com]. It is a ‘Tank’ (John Tankersley) novel. The book is an intense thriller set in the UK, involving recent events of mercenary forces returning home from the war torn Middle East.”

That is the description on the back cover of Warrington, UK author Conrad Jones’ fourth book, The 18th Brigade. Conrad has been a Facebook friend for some time and I really wanted to read one of his books so he graciously sent me a copy of The 18th Brigade to review. I feel very bad about the fact that I didn’t like this nice man’s book, at all. This is however, no reflection on him personally, as I think he is a very good writer and has a lot to be proud of.

AlthoughThe 18th Brigade is incredibly ambitious storytelling and quite well written (despite the numerous typos I found in the book), it is also perhaps, the most violent book I have ever read and I am not easily offended. It is filled with characters I despised and had absolutely no sympathy or empathy for. While sadly, they might be based on people who exist in real life – from Neo-Nazi skinhead thugs to drug-addled, immigrant Somalis to British Special Forces mercenaries – these are not men you can like, understand or accept their barbaric nature, no matter what their circumstances. There is no good guy to root for and I’m not sure if Conrad Jones was making this point with his book. I have had to put it down so many times because of how much it disturbed me that it has taken an unusually long time to read. As a result, I’ve found the plot to be somewhat confusing in places as it flashes between various locations and subplots.

The story begins with a roadside bombing in Baghdad in which 17 Iraqi civilians are slaughtered by an ex-Royal marine who mistakenly identifies the members of a white Opal as being suicide bombers for Islamic extremists. It is explained to the reader that “in both Iraq and Afghanistan there are more mercenaries than regular soldiers. Blackwater and the 18th Brigade are two such private security firms used by the American government.” If any of this novel is based on the slightest bit of truth, and I’m sure it is, I have to say that there are no good guys anywhere when it comes to war and the selling of arms (this point is well stressed in the movie Lord of War starring Nicolas Cage, Ethan Hawke and Jared Leto). The 18th Brigade is filled with heinous characters and laced with beatings, bombings, burnings, dismemberment, explosions, shootings, stabbings, and then some!

There is one particularly vile, stupid character by the name of Brendon who is a member of the 18th Brigade task force:

‘I think we were followed by a surveillance team, don’t say anything about the Somalis’ the note read.

“Why would they think it was us?” Brendon piped up, trying to join in the pretence, but not quite having the intelligence to carry it off.

Jay and Terry looked at each other in disbelief, shaking their heads.

“Have you had a look in the mirror lately, you stupid twat?” Jay answered him. Brendon flushed bright red realising how stupid he had sounded. His hand went to touch the swastika tattoo under his right ear almost unconsciously, confirming that he looked every inch the racist thug that he was, as did all his colleagues.”

The head Somali Yardie that these men are looking for is an equally abominable human being named Omar; a despicable man who easily kills his own men once they’ve outlived their usefulness to him:

“Omar slammed the car door shut on his fingers. The man screamed and released his grip on the car. Omar opened the door, and then slammed it shut again. The driver’s fingers were bloodied stumps, the nails cracked and split, his breathing was becoming more erratic, making him sound like he was drowning in his own blood. Omar took his blade from his jacket, and he grabbed the battered driver by the chin. His long bony fingers held the man’s face in a vice like grip, as he carved his nose into two, lengthways, from his forehead to his top lip. The driver let out a blood curdling scream as the cold blade cut him to the bone, slicing the cartilage like butter, scraping his bones and ripping the soft tissue.”

There are many passages that are just as violent and grotesque, if not more.

It would seem that Mr. Jones has experienced some of this level of violence in his real life, as attested to by a newspaper article entitled “Author Foretold Mumbai Attacks” by Geoff Abbott of the North Wales Chronicle. In the article, Abbott writes,

“In March 1993, Conrad was working as an assistant manager at MacDonald’s in Warrington (where much of The 18th Brigade is set), when the IRA exploded two bombs planted in cast iron litter bins.

The first blast outside Boots drove panicking shoppers towards the second bomb outside Argos which exploded seconds later showering the victims in shrapnel and killing Jonathan Ball, aged 3 and Tim Parry, 12.

Conrad said the harrowing memories of the Warrington bombings have scarred him for life but admits to using his books as a kind of “therapy” to relieve the trauma.”

I live in Kingston, Ontario, Canada and thankfully, so far, no terrorists have ever set off bombs here so I can’t quite imagine what it would be like to live in an area of the world where such a tragedy is not surprising news. However, I have been to Northern Ireland and I understand the reasons behind its troubled and violent history and I can certainly empathize with the victims of IRA and other militant fundamentalist acts of terror and so I empathize with the pain and suffering experienced by Conrad Jones.

I don’t know if I would have liked The 18th Brigade more if I’d read the three previous Soft Target novels, but I don’t think I’ll ever find out because these kinds of stories are not for me. I’ve enjoyed political and suspense thrillers by John le Carré, Scott Turow and Robert Ludlum and I love the television series 24 (which this book reminds me of slightly), but there’s no Jack Bauer here to applaud. John Tankersley just isn’t likeable enough. In fact, he doesn’t come into the story until Chapter 18 and is only featured in 11 short chapters out of 65.

If you enjoy action-packed thrillers filled with vivid descriptions of a myriad of ways in which a person can die…by all means, check it out! There are, in fact, quite a few readers on Amazon.com who gave this book a 5 star rating.