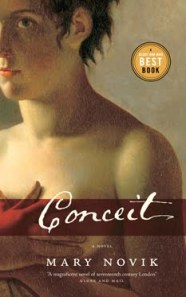 Vancouver author Mary Novik’s debut novel, Conceit (awarded a Globe and Mail Best Book stamp of approval), is an ambitious, elegant and visceral story of the life and loves of Margaret More Donne, a.k.a. Pegge, daughter of the famous 17th century poet, John Donne (whom I first heard about in Van Morrison’s song, “Rave On, John Donne”). It is also the tale of the great love affair between Ann More – a descendant of Sir Thomas More – and John Donne, who after her death, became an Anglican priest and the Dean of St. Paul’s Church in London.

It wasn’t until part three, “Death’s Duel”, that I was truly hooked on the story and wanted to know if Pegge ever got to consummate her love for Izaak Walton, although (up until that point) I couldn’t understand why she was so attracted to him. Because Novik switches the voices of the main characters and time periods without warning from chapter to chapter, you can get confused about where you’re at if you put the book down for too long. However, this impressive piece of literature is well worth the effort and by the end we discover that the Pegge we thought we knew; who was quite possibly going mad as a result of her obsession with her late father; was someone who was, in fact, incredibly clever and full of guile.

One of my favourite passages came in the very last paragraph of the book:

Come, William, I see Venus rising like a pink nipple on the plump horizon. Shall we make that clock of yours run faster? Let us bed down together in this new dawn and weave a silken tent of arms. Such feats are not reserved for extraordinary lovers, and my love for you has grown over the years to marvellous proportions. Let us die together in the act of love, so death cannot divorce us. When our grave is broken open, our souls shall take flight together, assuming limbs of flesh, and lips, ears, loins, and brows. But first let us speed darkening time and savour this long night of love.

Did you sigh when you read that? I did, and if you love historical fiction (I’m envisioning the movie version!), this captivating book will make you sigh deeply too. Just in case you have forgotten, Mary Novik’s Conceit will remind you of the soul-expanding sensation that is true passion.