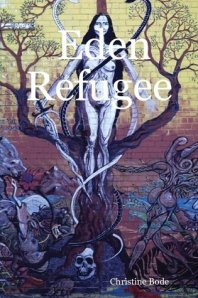 KINGSTON, ON – JUNE 26, 2008 – Christine Bode was born and raised in Kingston, Ontario, Canada. She has lived in Toronto and Vancouver and has been writing poetry and song lyrics since she was a teenager. Her first poem, about Shaun Cassidy, was published by Scholastic Book Services in Rock’s Biggest Ten and in 16 Magazine in 1978. Encouraged by a personal letter received from Bob Geldof in 1987 and mentored in this decade by Canada’s legendary broadcasting icon, author, actor and Renaissance man, Patrick Watson, she continues to write and almost understands the meaning of metre. Some of her work has been published in local newspapers, various American anthologies and on the Internet. Many of the original versions of the poems and lyrics in Eden Refugee have been edited.

Christine is the owner and operator of Scully Love Promo, an Internet based business through which she provides online marketing and promotion for first class talented musicians, authors and other artists.  Christine is also a senior entertainment writer for PartyinKingston.com and contributes concert and CD reviews as well as a monthly feature called Actor’s Spotlight.

This is Christine Bode’s first published collection of poetry.

Link to preview the book or order your copy of Eden Refugee at: